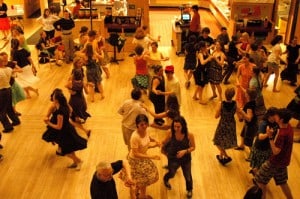 A couple of weeks ago, I wrote an article that was basically intended to be an introduction to the world of Contra dancing. As a result of the article, twenty new people came to the dance that week, and, dare I hope, the increase in new member attendance this past Saturday might may also have been a by-product of the exposure. When twenty more people than expected attend, it not only can end up covering a chunk of expenses for the event, but it can result in putting money in the kitty for future sessions. Because ultimately, dance is a business, and nobody needs an Econ 101 course to learn that a healthy business runs both on a mixture of loyal carriage trade, topped by an influx of new customers.

In my days as a travel industry executive, I did just that. I catapulted the American Express Travel Service Office that I managed in downtown Los Angeles to “Top Ten in Profitability” (from among 150+ office across the United States, at the time) for three years in a row. Amex eventually ended up giving up this heritage part of the business, for various economic and technological reasons. Times have changed.

Another beloved business that has been driven away is brick and mortar bookstores. There are always many factors at play, but how can the sensory joy of browsing in a bookstore, and the addiction of not leaving without at least one purchase, be understood by a generation that doesn’t read…as much.

Lessons for everything from ailing businesses to ailing hearts can be found in Contra dancing. I believe that three lessons I’ve learned from this genre of dancing will help any business not only survive, but thrive. They are:

>Welcoming of newcomers, insistence on mutual respect and innovation.

Married contra dancers attend regularly together. However, when new people show up on the scene, the etiquette is that the pair will divide into two, each taking on a newcomer of the opposite gender. Two people of the same gender (I’ve even seen two guys) will dance together, to ensure everyone had a good time. Another key to helping newbies, and the cause of allowing for enough partners for everyone, is when men blessedly refuse to book ahead.

Booking ahead, meaning, committing in advance to partners, is the bane of the existence of dance community. When people do this, they effectively close the shop, making it so that newer dancers cannot find partners. When new blood does not enter a dance society, however, it begins to die off. The international folk dance community, for example, consists mostly of octogenarians.

My Israeli dance community is threatened in this way. Most people, if they know at all what Israeli dancing is like, think of people holding hands, dancing in circles. Although that still exists, partners dancing has taken over the scene. On a typical night in most big cities, for about a four hour span of time, circle and partner dances are alternated in twenty-minute intervals. While there should be, and often actually are, enough lead and follow pairs to go around, women entreaty men to dance (just) with them, to commit to them.

As a person who can’t stay married myself, making sweeping commitments like that is a pretty alien concept. Some of the dance sessions are “couples only” events, so restrictive that, if you haven’t arranged a partnership in advance, you can’t go. You sit home, $10 burning a hole in your pocket, as you flip through your Netflix options. Conversely, the “open to all” contra dance etiquette allows any person, of any gender, age or level of expertise to show up, dance through the evening, and get their money’s worth of exercise and socializing.

In general, at contra dancing, people do not “refuse” to dance with each other. I even saw a person wearing a T-shirt that said, “Dance with first person you see.” That’s how we do it. To me, this is akin to a business having “the customer is king” attitude.

Finally, innovation. Innovation is of course essential to any business. How innovation fuels contra dancing, is that every time you attend, there is a different band playing different songs, with a different caller calling different dance patterns. Then the dancers themselves embellish what they are given by adding so-called flourishes, twirls and flirty eye contact to the mix. The pageant of it all is joyous and uplifting.

The inviting nature of contra dancing should stand as a metaphor for any business or pleasure activity that seeks to expand and thrive.