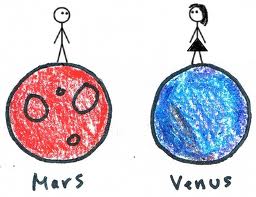 When You Live With Mars… Okay so there was more to the USPS story. After receiving the second USPS slip with the same wrong information, on Friday I find the USPS person on my block. She’s not the regular. I called again to the 800#. I talked with two guys for one hour and I get assigned to someone to track down the package. The man says, “Well I don’t understand why this has been so difficult because assigning someone to find a package is the first thing that we are supposed to do. It’s standard procedure.”

If there’s one thing I’ve learned about the USPS this week, is that there is no standard procedure.

On Monday at my house, I notice a big bottle of pills for my son. I go to my husband and ask incredulously,
“You got the pills?”
He said, “Yeah, I told you.”
“No, no you didn’t.” I respond. He insists that he told me.
Dropping that point, I ask, “What did you say to the post office?”
He says, “Nothing, I handed them the two slips and a couple of minutes later they handed me the pills.”
“What did they say about the slips with the wrong post office listed and the wrong article number?” I ask.
He says, “Nothing, what was I supposed to do? Fight with them? I got the pills!”
“If that’s what you think this is about, then you need to read my blog, because obviously you don’t understand what they put me though.” I yelled, “YOU WERE SUPPOSED TO DEFEND MY HONOR!”

I was so upset. I don’t mean my husband should have fought with someone at the post office, but I did think he should have asked how we got these wrong slips with wrong information so that NO ONE ELSE WOULD HAVE TO GO THROUGH THIS AGAIN?!?!

And when I started thinking about it, honestly, I think we have a “men are from Mars and women are from Venus” thing. Most men I know would think, “What do you want? Wasn’t getting the pills the goal here?” And while yes, that was the goal, it wasn’t the only goal.

My mother, a therapist, used to say that most of the women she saw in her practice wanted a man to rescue them. I certainly fall into that category. I openly admit when I met my husband, I wanted him to rescue me.

I’m a fighter. I’m and “injustice seeker” – my mother’s term. I fight for my kids, my family, things I feel passionate about. My parents were fighters as well. My in-laws were not. And even though my husband has shown up at many a battle next to me, he is not a fighter either.

And I get very disappointed when people in my life don’t fight for me.
My husband thinks he did support me because he got the pills. Most men would probably react like my husband. Are many women reacting like me as well? How did we get here?

Does Hollywood’s idea of male and female roles influence even the most unromantic of situations? In my Hollywood movie, my husband comes home and tells me of conquering the USPS beast with at least some anecdote for how the world is now a better place with him having fought for justice!

So while I’m practicing my Buddhist practice of acceptance, I think that I need to reject my fantasies of my spouse and instead focus on the power of what actually is. My husband is loyal, provides for our family, is interested in being intimate no matter how much I weigh, cooks, walks the dogs and is very funny. That’s only a partial list.

So perhaps we can reject the view that others have taught us and be appreciative of the blessings of what we actually have?

And in the future, we’re having the mail-in pharmacy send the pills to my husband’s office where there will always be someone to sign for them.