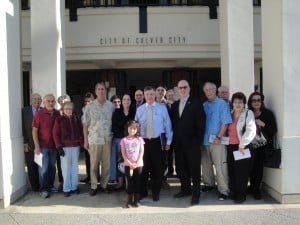 Councilmember Jim Clarke ended the year by becoming the first candidate for a seat on the City Council to file his official forms with the City Clerk on December 31st. Surrounded by supporters, he went through the many documents with the City Clerk Martin Cole and his assistant Jeremy Green to assure everything was in order. Everyone held their breath when Mr. Cole asked Mr. Clarke if he was sure he wanted his name on the ballot as a candidate for City Council. A resounding cheer went up when Jim replied affirmatively.
The official filing period ends January 13th. Other potential candidates have until that date to submit their papers. Information about the election can be found on the City’s website www.culvercity.org. The election is April 8th and tabulating of the ballots will take place in City Hall after the polls close at 8:00 p.m.
Jim won a seat on the council in 2012 when, for the first time, four out of five seats needed to be filled. Since he was elected to the unexpired term of a councilmember who resigned his position, Jim is up for election again after only two years.
For more information on the candidate email [email protected] or go to www.clarke4council2014.com . Like him on Facebook at Clarke4Council2014, and follow him on Twitter @Clarke4Council.