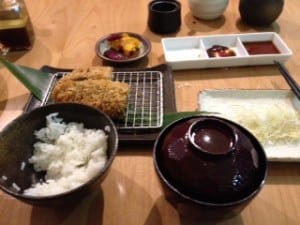 Culver City Adult School’s own Japanese language teacher here, reporting on one of, if not the, newest Japanese restaurant in town! I am proud to announce that Kimukatsu opened here even before their location in the traditional bastion of all things Japanese on the Westside: Sawtelle’s so-called, ” Little Osaka.”

With first the sushi craze, and now more ramen joints on every westside corner than a Tokyo precinct, it is refreshing to be able to greet a new form of Japanese restaurant. Kimukatsu specializes in…Ton Katsu. Ton Katsu (豚カツ) which literally means “Pork Cutlet,” and is a cuisine originally imported to Japan from Europe, most likely Germany or France, around the turn of the century, when the Japanese cozied up with Western Europe after it’s “opening to the West” by the United States’ Commodore Perry’s Black Ships. The “ton” part is Japanese, and is written in kanji or hiragana, but since the “katsu” part is the foreign word “cutlet,” it is supposed to be written in katakana.

The one form of Japanese food that had not been that accessible commercially in the States until now, it became a tradition to go immediately for Ton Katsu for my first night’s dinner on trips to Japan. In fact, my last trip to Tokyo was a 24-hour layover in August 2011. I literally stayed across the street from my favorite tonkatsu place: Katsukichi, in Suidobashi.

The typical Ton Katsu places in Japan let you choose the cut of pork that you want. The dish is breaded in the now famous – because you can even buy it at Trader Joe’s – “panko” (bread crumbs) and then the dish is accompanied by often unlimited, pickles, soup, rice, and huge heaps of thinly shredded, tasteless, cabbage. At Kimukatsu, there’s a different twist; you don’t choose the cut of meat, but instead are pieces of thinly sliced pork, apparently 25 layers of them. You choose from various added ingredients, like black pepper or garlic or cheese, which results in a lighter, more digestible, dish. I never knew this place in Japan, but I’ve been away for a few years, and this is apparently a chain direct from Japan.

The wait staff was mostly non-Japanese-speaking, but there was at least one native speaking lady there to serve us. Things feel more authentic when you can speak the language of the cuisine, at least for me. There was virtually no ambiance in the place; white walls with nary a piece of art and none of the trendy Japanese street scene videos or ethnic decor you can see in some of the restaurants now on Sawtelle. The austere, light wood interior can be considered stylistically Japanese, although Ton Katsu restaurants in Japan are more typically known to be among the most folksy of restaurants. The music was some loud Rock n’ Roll…I wouldn’t expect to hear Enka (traditional Japanese ballad-type music) or anything, but some Jpop, at least, would be a perfect addition to the ambiance.

The food was definitely authentic, and everything tasted good, with generous enough portions, served on attractive Japanese ceramicware (yakimono). Prices were relatively high for a dinner entree ($15 ~ $20) with a nit-picky $1 more for this, and $3 more for that, kind of additions. They also serve some non-pork appetizers and sides I did not try this time, but the food is generally the antithesis of the veggie place next door: deep fried, and mostly meat.

They will have their liquor license later this month, and staff said they will have a selection of sake, wine, beer. I spied six spigots for draft beers of some kind; I hope they have some serious Japanese ones. I’d go sit at their ample bar just for that, and a scoop of their relatively hard to find kurogoma (black sesame) ice cream. I actually love pairing dark beers and ice cream, so I’ll have to make at least one trip back to see what beers they have to offer.

And, I would definitely go back. Although I must take this opportunity to whine about the fact that we also need some shops (clothes, accessories, art, dare I say books) to browse in, among our myriad Culver City eateries, this is a great new addition to our “Culver West” Culver Crossroads little culinary corner.

The restaurant information is: