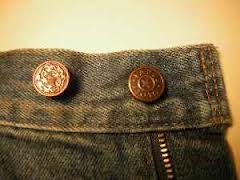 That was before last Friday.

Last Friday while going to the bathroom, I noticed I was fatter. When I put my underwear on, there was a fat pocket on my lower left abdomen that wasn’t there the day before. I poked at it and wondered where the hell that came from. When I put on my stretch jeans, I noticed they were a bit snug, but having nothing else to wear, I thought, “On well” and drove to my destination-a meditation retreat for the weekend.

Later that day during the retreat, I burst into tears and started sobbing about what I had done to myself. You see all my actions weren’t totally conscious. I sort of had “half thoughts” instead of fully realizing what I was doing, which was punishing myself for being fat. As I was sobbing and sobbing, I said out loud how I had insisted on staying uncomfortable in my jeans for mediation and yoga because that is what I deserved. And I wailed, “Who does that? Who punishes themselves like that?” I realized at that moment what I had done and realized how disturbing and frankly violent my actions were to myself.

That night while careful with what I ate-meals provided by the facility, I ended up eating too much salad and got too full and had to take a good 30 minute walk to burn off the feeling of too full before the evening session. I was panicked that I would be hungry later if I didn’t eat enough then. And even though it was vegetables, I got too full. To say I was “off balance” is an understatement.

By that night, I did change into my soft pants, which I wore the rest of the weekend. I also explored the 14 year old child within myself, who started those thoughts of punishing herself for being fat. You see my wiring is very, very old. That 14 year old used to pray to God to take away my hunger because I thought if I wasn’t hungry I wouldn’t be fat. I did many many diets depriving myself and then finally, finally allowing myself to eat. She-my 14 year old, is still wounded. She is still sad. She needs love-she doesn’t need more loathing.

So now I’m trying to work on some inner healing. I thought that the 14 year old didn’t have the grip on me that she still has. I thought I was past that point. But you see what a pocket of fat can do to throw someone back into a very dark place.

But I am 49. I’m not 14 and I can make different choices and I can decide on different outcomes. But I will respect this wounded child with a lot more care that I have in the past. I foolishly thought she was buried with my past and I have to respect that she still lives within in and comes out to show me my vulnerable self.