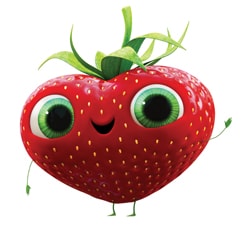 Several of California’s leading produce growers and packers have teamed with Sony Pictures Animation on a campaign that benefits a national hunger-relief charity and coincides with the filmmaker’s launch of “Cloudy with a Chance of Meatballs 2.”

Barry the berry, a star of the upcoming “ Cloudy with a Chance of Meatballs 2,” was one of the attractions for California Giant Berry Farms to participate in a hunger-relief tie-in to the film. As part of the arrangement Sony Pictures will make a cash donation to the Chicago-based Feeding America, according to Vicky Boyd on The Packer.

Consumers can scan quick-response codes on produce packaging from participating firms, directing shoppers to a website. There they’ll find recipes, information about the film and how they can donate to Feeding America.

The effort kicks off in July and ends in September, which is Hunger Action Month. The movie is set to premiere Sept. 27.

“Typically, most of our promotions always have some sort of cause as a marketing component,” she said. “We’re excited to join in this national campaign to really support (Feeding America) and we they’re trying to do.”

Jewell said she already had viewed some of the movie trailers and believed it was a great opportunity to promote the industry’s message that eating fresh produce is fun.

“What a better way to help consumption than to tie in with Sony and a movie with food as heroes,” Jewell said. “It’s really a great animated movie. It’s a great way to enjoy a family movie and have a positive message about fresh produce and also do something good for people in need.”

“We feel between us and our partners that this is just a great way to promote Feeding America,” said Bob Borda, vice president of marketing. “It’s a strong cause to promote and help those in need.”