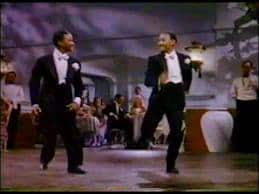 This month MCLM’s Black Talkies on Parade Film Series is pleased to host special guest, Mr. Tony Nicholas, son of Fayard Antonio Nicholas, one of world famous Nicholas Brothers. The Nicholas Brothers became a featured act at Harlem’s Cotton Club in 1932 and were considered by many to be the greatest tap dancers of their day. The Nicholas Brothers were a sensation on both stage and screen. The brothers made their Broadway debut in the Ziegfeld Follies and also appeared in Richard Rodgers and Lorenz Hart’s legendary musical “Babes in Arms” in 1937. They astounded audiences in classic films like Stormy Weather and The Big Broadcast of 1936, and left their mark on Hollywood by inspiring dancers like Gene Kelley and Fred Astaire.

At the conclusion of the film, Tony Nicholas will share stories of the Nicholas Brothers along with a Q&A. Beat the summer heat with the coolest tap-dancing duo to have ever have graced the stage and screen.