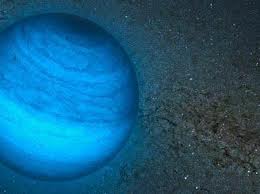 LOST IN SPACE: A PLANET WITHOUT A PARENT STAR – Astronomers have identified a body that is very probably a planet wandering through space without a parent star. This is the most exciting free-floating planet candidate so far and the closest such object to the Solar System at a distance of about 100 light-years. Its comparative proximity to us, and the absence of a bright star very close to it, has allowed the team to study its atmosphere in great detail. This object also gives astronomers a preview of the exoplanets that future instruments aim to image around stars other than the Sun.

Free-floating planets are planetary-mass objects that roam through space without any ties to a star. Possible examples of such objects have been found before, but without knowing their ages, it was not possible to know whether they were really planets or “brown dwarfs”—tiny stars that lack the bulk to trigger the reactions that make stars shine.

But astronomers have now discovered an object, labelled CFBDSIR2149, that seems to be part of a nearby stream of young stars known as the AB Doradus Moving Group. The researchers found the object in observations from the Canada-France-Hawaii Telescope and harnessed the power of the European Southern Observatory’s Very Large Telescope to examine its properties.

The AB Doradus Moving Group is the closest such group to the Solar System. Its stars drift through space together and are thought to have formed at the same time. If the object is associated with this moving group—and hence is a very young object—it is possible to deduce much more about it, including its temperature, mass, and what its atmosphere is made of.

The link between the new object and the moving group is the vital clue that allows astronomers to find the age of the newly discovered object. This is the first isolated planetary mass object ever identified in a moving group, and the association with this group makes it the most interesting free-floating planet candidate identified so far.

Free-floating objects like CFBDSIR2149 are thought to form either as normal planets that have been booted out of their home systems, or as lone objects like the smallest stars or brown dwarfs. In either case these objects are intriguing—either as planets without stars, or as the tiniest possible objects in a range spanning from the most massive stars to the smallest brown dwarfs.

“These objects are important, as they can either help us understand more about how planets may be ejected from planetary systems, or how very light objects can arise from the star formation process,” Delorme points out. “If this little object is a planet that has been ejected from its native system, it conjures up the striking image of orphaned worlds, drifting in the emptiness of space.”