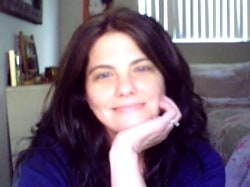 After teaching Drama and English during her first year at Culver City High School, Jill Novick has accepted the position of Creative Director of Theatre for AVPA for the 2012-13 school year. Current Creative Director Justin Lujan will be stepping down from the position, but will still be involved in teaching and directing with AVPA Theatre during the next year.

An Introduction of Jill Novick

Jill Novick began acting as a child, and was fortunate enough to have been nurtured by a program very similar to AVPA at Mamaroneck High School called PACE (The Performing Arts Curriculum Experience) in New York. There she learned what it was like to bond with people of like minds and share a passion for the performing arts. Jill performed in over twenty musicals and plays. At seventeen she auditioned and was accepted into NYU’s Tisch School of the Arts. She also began working professionally, doing commercials in New York. She left NYU in her junior year to pursue her career as a professional actor. Her career spanned 20 years and included series-regular roles on FOX’s “Beverly Hills 90210” and NBC’s “Sisters.”

In 2003, she went back to school to finish her degree. She spent two summers as a teacher and director at Cal State Northridge’s TADW (teenage drama workshop), an intense 6 week summer program for teens. She also taught drama at Panorama High School in 2008-2009 while working on her teaching credential.

Now a full-time teacher, going into her second year at CCHS, Jill is living another life-long dream, to teach high school Theatre and have a positive influence on other young artists in the development of their craft. Jill is no stranger to AVPA, having already immersed herself into the program during her first year at CCHS. She took theatre students to the Spring DTASC Shakespeare Festival and was the Troupe Director of our Thespian Society. She also taught 2 CCHS drama classes this year, taught the spring scene study class for AVPA, and co-directed the spring musical, Sweeney Todd.

Jill’s background as a professional actress and her experience working with young people will serve as an invaluable asset to the entire AVPA program. She is very excited to be the new Creative Director of Theatre for AVPA!