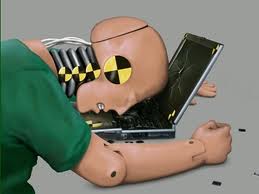 Regrets? I’ve Had One Lately — Sorry for the delay in new blogs lately-my computer crashed. Yes, I’ve become one of the many unfortunately souls who lose their technical device. I’m hoping the Geek Squad is going to let me know that yes, they have saved my photos, but alas no such call has come yet.

When I was first told my computer hard drive was crashing, I kind of couldn’t believe it. I mean I know we hear dozens of commercials saying, “Buy such-and-so to save your data,” but I didn’t have that much data and the laptop wasn’t that old, so I thought, “Well I’ll back up things when I have more data on the damn thing.”

So my mission today is to remind everyone, “BACK UP YOUR DATA TODAY.” But probably I’m just one of those commercials-you know the kind you hear all the time about backing up your data and well you think, “Yeah, I should do that but I don’t have that much data…”

You see I have someone else’s very important photos on my laptop from a once in a lifetime event on my Mac. That’s been part of the problem. I’m not technically literate and the Mac has caused many problems in transferring the photos to disks. I’m sure the problem is something easy you Mac people would have known how to deal with, but this being our first Mac, us PC users were lost more than once.

I’ve made so many mistakes in this “little” project, and I can honestly say that I’ve learned from my mistakes the hard way. The day I was told my hard drive was crashing, I felt sick. The feelings I had were of such deep regret, loss of control, humiliation and frustration. I hate that combination of feelings. My dear friend just kept saying, “I know exactly how you feel and it sucks,” because of course she did know exactly how I felt. I am not alone in experiencing the “devices break down” lesson.

You wish you somehow had a time machine and simply by making a very small different choice, you could change everything. In my case it would have been to NOT press the YES button when it asked me if I wanted to delete the photos from my compact flash card. You somehow obsess as if the obsessing will turn the time clock backwards so instead of pressing “yes,” you press “no” and save everything.

I’m miserable just thinking about it.

Being human and making mistakes is so very difficult. It’s one of the hardest parts I think on this journey we all play out. Regret is perhaps one of the worst feelings. I love it when people say, “I have no regrets.” REALLY? You mean you’ve NEVER pressed the wrong button?

So it’s been a week now, and I’m still hoping that with the extra $100 I paid, they can save those photos. I’ll give up everything else, if the photos can be saved. (Now I’m in the Bargaining phase…) I’m spending lots of time trying to forgive myself and to sustain my faith in my ability to cope with whatever the outcome. Pray for me. And…back up your data.