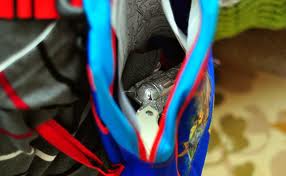 If you were one of the many parents who received an auto-call from the school district last night, you know some of the story; Culver City Crossroads has details.
On Monday, a 7th grade student brought an unloaded handgun to Culver City Middle School to threaten another student. When the gun-carrying boy got his intended victim into the bathroom with a group of other boys, he showed the gun and made a threat.
Everyone left and went to class.
It wasn’t until the intended victim got home and told his parents that any adult was involved. At that point, the parents called the CCPD, who then went into action, going to house of the gun owners and asking to speak to the boy. The gun was found in his backpack, with no bullets.
According to School Board member Kathy Paspalis, the school was then notified of the incident by the police, and Tuesday, June 12 all the boys and all the parents involved in the incident (those present in the bathroom) were interviewed by the police and the school authorities.

Lt. Ron Izuka of the CCPD said that the “juvenile was arrested and taken into custody at 6;30 am on June 12.”

Last night, we received a report of potential weapons possession by one of our students.   We reported the information to CCPD.  While I cannot broadcast specific details of the incident in order to avoid interfering with the police investigation, I can report that before school this morning and off CCUSD property, the same student was found to be in possession of an unloaded gun.  As of this morning, CCPD is moving forward with their formal protocol.
Safety is our priority. We take all reports of safety concerns seriously.  Students will certainly be discussing the incident.  Please remind your child, that if they hear or see anything that could negatively impact the safety of anyone on our campus, to please report!  Even an anonymous note is great – we need their help!
Please let me know if you have any additional questions or concerns.  Thanks!