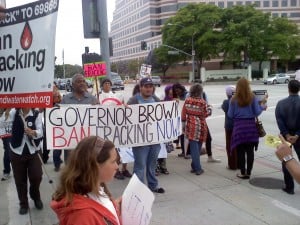 With the official meeting not scheduled to begin until 7 pm, the protestors in front of the Culver City City Hall were waving signs and chanting against fracking. Heavy media presence made this this hot spot for the evening news, with KNBC, KTLA , KCBS and KNX newsradio all shooting and interviewing the dozens of protestors.