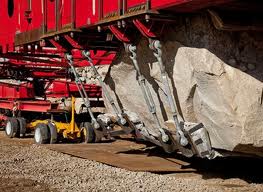 How Much for that Rock?

Okay-so I don’t get the whole LACMA rock frenzy. I admit it. Okay, it’s not that I don’t get it. Hey this is L.A. and we are home to Hollywood, and we’ve sent all kinds of weird items into the public view-take for example sending the Terminator to be Governor. We’re quirky that way. So what is it about a rock? Last week in my groups, I suggested that the LACMA rock was an example of indulgence. Some people were offended.

It’s indulgent to spend $10 million on a rock. You can think the future art piece is important, or you can think this is a silly art project, but regardless you must consider the cost of the rock. This amount includes the artist’s fee (undisclosed), the transporter, all the transportation workers, and supposedly the cost of city workers. The money has come from private donations. People have a right to spend money on what is important to them, however, spending $10 million dollars on this project should be considered within the public debate. We cannot, given the times we live in, simply accept the cost and not at least pause to consider its price. After all, it’s not even art yet. It’s a rock waiting to be art.

The L.A. Times ran a series of articles about the journey of the rock. I didn’t read about the “controversy” of the rock, because I guess there isn’t one. Why isn’t there a controversy? Instead it seemed that city officials and people connected with the museum took the rock very seriously and I kept waiting for the punch line.

Currently in Santa Monica, a famous sculpture by Paul Conrad [of Los Angeles Times political cartoon fame] called “Chain Reaction” is in disrepair. When originally the city considered whether to accept the gift of the sculpture, a model of the sculpture was put into city hall and citizens were asked to weigh in. According the L.A. Times, Feb. 3, 2012, “Of citizens surveyed, 730 recommended against accepting the sculpture, and 392 favored acquiring it. The Arts Commission stood solidly behind the idea, however, and the City Council, after intense public debate, approved the installation.” Now It will cost the city over $423 thousand dollars to fix it. Should the city spend the money to maintain the sculpture or take it down? The city has put this debate into the public discussion and has suggested that perhaps a private donor or the Conrad family would like to take over and pay to maintain the sculpture. So far no one has come forward.

I am not questioning the value of art within our community or even our country. I am questioning priorities. Because I question priorities doesn’t mean I don’t like art or that I don’t understand it’s value. I will always vote to fund art over war. And while certain GOP candidates assert that education is an entitlement, education is fundamental towards a healthy progressive society. I wonder how many students could have the opportunity to study art with $10 million for their education?

Isn’t it worth a discussion?