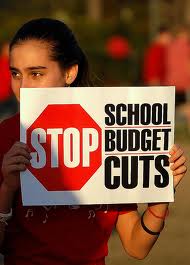 PTAs throughout the district will be organizing demonstrations in front of each CCUSD school on the morning of Friday, May 13 to oppose the proposed budget cuts coming out of the state Legislature in Sacramento.

CCUSD opposes a cuts-only state budget and supports a balanced budget with a combination of cuts and revenue extensions. Our schools and students are in a state of emergency until lawmakers pass a balanced budget and approve the needed revenue extensions to support education funding, especially since K-12 education funding has taken a disproportionate amount of budget cuts over the past several years.

State and local funding for schools has been cut by more than $18 billion, or about $1,900 per student in the last three years; Culver City Unified School District has cut $6,456,652.00 from its budget over that time as a result of ongoing statewide cuts to education funding.

CCUSD will be forced to cut an additional $3 million from its budget if the Legislature does not pass revenue extensions, so the California School Boards Association, Association of California School Administrators, California Teachers Association and other members of the Education Coalition support local communities in planning events and activities throughout the state during the week of May 9-13.

The high school graduation on June 18 was a proud moment for many Culver City families, with one Valedictorian, Alexander Kurihara, and 12 Salutatorians (that’s a tremendous number to tie for second place) gracing the …[READ MORE]

In a meeting at the Culver City School District on Jan. 20, the Environmental Sustainability committee met to talk about how to make our schools greener, and save funds while saving energy. As ES Committee …[READ MORE]

CCUSD School Nurses will be providing a free flu clinic for all CCUSD families and community members on a first-come, first-served basis, while supplies last. The clinic will be held from 3 to 8 p.m. …[READ MORE]