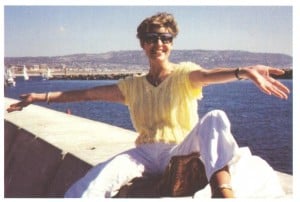 There were flowers. Between the great wreaths and small ones, the doors into St. Augustine’s Catholic Church were bordered in color and scent on Friday morning, May 6. The wishes for the peaceful repose of Ursula Vera may have had those entering her funeral service reminded of spring. Inside, the white and gold cloth of Pentecost was draped between the Stations of the Cross. Many who came for the service commented on the beauty of the church, and how much it would have pleased Ursula, who died on April 28 after a long struggle with chronic kidney disease.
The church was not as crowded as it had been for the funeral of her husband, Albert. There was a very different feeling among the mourners. Those who came to say goodbye were close, the friends of years and decades, the ones who knew her heart. The women who wept were sad to lose her, but relieved that all of her struggles were over. Ursula’s death closes a chapter for many, and the sorrow was not just for her loss, but for all the pain she had endured.

The saga of the Vera family is one that has colored the 20th century history of Culver City. The small store on Sepulveda Boulevard was the hub of a wheel that expanded to City Hall, and out even farther to farmland upstate. The Veras were a classic American immigrant story, working long hours and giving their all. Ursula was famous as a beautiful woman with a warm smile and great heart. But the tragedies of their private life were devastating, and friends often pleaded with Ursula to leave Albert,  to no avail.

Father Kevin Nolan, who led the Mass, noted that Ursula first came to St. Augustine “to find God’s consolation, and to trust in His resurrection.  Ursula trusted in the victory of God, and she allowed that gift of trust to be part of her words in the hope that she shared with others. She always had that sense of wanting others to be lifted up, to know joy.”

While I did not know Ursula well, like many others, I knew her from the store. She had a warm smile and a kind manner. I knew much more about her from the stories of her friends and neighbors who ached for her as a victim of domestic violence. Chronic kidney disease can be one of the perils of high blood pressure, which is often a tragic physical effect of having to cope with more stress than either your body or your spirit can handle.

Albert Vera was a man who felt no compunction about leaving his wife at home and taking his mistress out to an event, as I witnessed on several occasions. Perhaps the wounds he inflicted on Ursula’s pride were even harder to bear than the bruises he inflicted on her body.

At the funeral Mass, Diane Huseby sang the liturgy with a strong clear tone, inviting the congregation to join in. The many friends and mourners who had gathered for farewell included Mayor Mehaul O’Leary, Council members Andy Weissman and Jeff Cooper, along with Chamber of Commerce leader Steve Rose. In conversation, Rose offered that he had known Ursula for many years, and he was candid in his anger about the way her husband had treated her.  “She was a beautiful woman, and he made it a very hard life.”

There were flowers. Not the roses of romantic love or the daisies of friendship, but lilies of sorrow offering the legend “Rest In Peace.”