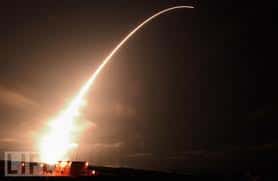 After more than a dozen laps through the inner solar system and six planetary flybys, NASA’s MESSENGER spacecraft was scheduled to move into orbit around the planet Mercury on March 17. The durable spacecraft—carrying seven science instruments and fortified against the blistering environs near the Sun—will be the first ever to orbit the innermost planet.

“From the outset of this mission, our goal has been to gather the first global observations of Mercury from orbit,” says MESSENGER Principal Investigator Sean Solomon, of the Carnegie Institution of Washington. “At the time of our launch more than six and a half years ago, that goal seemed but a distant dream. MESSENGER is now poised to turn that dream into reality.”

To move the spacecraft from its wide-ranging orbit around the Sun to an orbit around Mercury is a complex maneuver. First, the solar arrays, telecommunications, attitude control, and autonomy systems have to be configured for the main thruster firing (known as a “burn”), and the spacecraft, operating on commands transmitted last week from Earth, is turned to the correct orientation for MESSENGER’s Mercury orbit insertion maneuver.

After the burn, the spacecraft is scheduled to turn toward Earth and resume normal operations. Data will be collected by Deep Space Network antennas and transferred to the Mission Operations Center at the Johns Hopkins University Applied Physics Laboratory (APL) in Laurel, Md., to be analyzed.

The maneuver—which will be completed at a time when MESSENGER is more than 96 million miles from Earth—places the probe in an orbit that brings it as close as 124 miles to Mercury’s surface. The spacecraft was scheduled to begin its first full orbit around Mercury on March 18, and the probe will continue to orbit Mercury once every 12 hours for the duration of its primary mission.

“For the first two weeks of orbit, we’ll be focused on ensuring that the spacecraft systems are all working well in Mercury’s harsh thermal environment,” says APL’s Eric Finnegan, the MESSENGER Mission Systems Engineer. “Starting on March 23 the instruments will be turned on and checked out, and on April 4 the science phase of the mission will begin and the first orbital science data from Mercury will be returned.”

“The marathon cruise phase of the MESSENGER mission is nearing the finish line,” says Solomon. “We are extremely excited by the prospect that orbital operations will soon begin.”