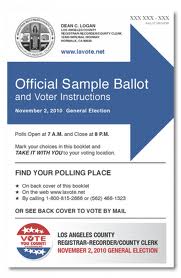 If you live in Culver City, the ONLY thing on your March 8 ballot is four contests for seats on the LACCD Board of Trustees, all elected at large throughout the massive L.A. Community College District, and your Sample Ballot has no info on the 16 candidates besides their NAMES.

Are you wondering why there are no candidate statements in your Sample Ballot? Well, the City of L.A. administers the LACCD election, along with LAUSD and L.A. City Council elections on the same date, and the L.A. City Election Code does not allow for printed candidate statements. Instead, each candidate is offered five minutes at L.A. Channel 35 to record a video. Unfortunately, less than half of the candidates have taken advantage of this offer, and of these, only seven (7) are candidates for LACCD Board of Trustees.

Taking a cue from San Francisco LWV members who hold SmartVoter Parties to prepare for local and state elections, the Culver City Unit will devote its February 15 meeting to group viewing and discussion of the material posted on SmartVoter by candidates for LACCD Board of Trustees. Remember “debate parties” before the 2010 Presidential Election? This will be like that, except that there’s no negative campaigning allowed on SmartVoter.org

Of course anyone can host a SmartVoter Party (please do!), but if you come to the League’s party, you’ll have the benefit of an especially well-informed and experienced group of discussants.

Hope to see you next Tuesday. Politics and lunch – what could be better than that?

Proposition 21 seeks to raise money for California’s state park system by adding an $18 surcharge to the license fee for each private automobile in the state. Day-use charges at any and all of California’s …[READ MORE]

Prop 23 – AB 32 in Reverse There’s no doubt that Proposition 23 has received more study, publicity, and news coverage than any other ballot measure to be decided in the November 2 Gubernatorial Election. …[READ MORE]

VIDEO: “Get Out the Parental Vote” Candidates Forum