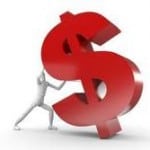 When Mayor Chris Armenta stated “We are ready to take action on closing the structural deficit,” he was at the end of a half an hour of remarks from the other council members, following a report from city Chief Financial Officer Jeff Muir. The brief but thorough budget report was grim, and as every one of the other council members had agreed, deplorable.

On Monday, Nov. 8, the figures presented by Muir were, as he emphasized, “not good news, but a lot of other cities are facing much worse.” Combining a year-end report with projections for the next five years, Muir presented a number of graphs regarding the fact that income was not projected to keep up with expenses. Several of the graphs looked almost comically like a skeletal hand, coming down on the numbers like a grim financial reaper.

In several places, the good offset the bad, but not enough to bring things into balance. The $14.6 million in sales tax represented a downturn, with the sales from Westfield not high enough to take up the slack from the loss of the car dealerships and medical equipment businesses that left Culver City.

Comments from the council were all suitably dark. Jeff Cooper offered that it “certainly not a warm fuzzy feeling, looking at all these numbers and what we have in store.” Andy Weissman noted that “Its obvious that the business model we have used is not longer sustainable,” and he added, “We are capable of being able to manage what we can do.”

It was Mehaul O’Leary that seemed most appalled and affronted by the information in the budget report, asking repeatedly “What will happen if we just continue down this road? What’s the worst case scenario?”

Muir, who returned to the job of CFO after a brief hiatus to the City of Inglewood last year, is seen by the council and the staff to be both solid and sensible. He answered O’Leary by saying that the city “would then have to chose which obligations to fulfill.”

After the meeting, Muir offered Crossroads his perspective. “We are at a point in time where the decisions we make in the next year or two, both as a City government and as a community, will shape the future financial viability of Culver City. Even prior to my arrival, the previous CAO had warned that predicted increases in costs and proper funding of current and future liabilities would outpace revenue growth, and the City would soon be facing a structural deficit.” As noted during the meeting, even before the changes in the charter, it was obvious that there would have to be other solutions, or there would be trouble.

Muir continued, “The severe recession we experienced has made this predicted structural deficit even larger in magnitude, and based on what we see going on there is no scenario under which this problem will fix itself. The model of financing municipal services is broken and it needs to be repaired. Like most other cities, the level of services provided in this community coupled with the significant short and long-term costs of labor cannot be supported by the local revenue base. Some or all of these things must be changed. “

“My personal opinion,” he concluded, “is that in order to maintain the level of service this community is accustomed to, even with significant reform to employee benefits and compensation, new tax revenues will be necessary in the future. That said, I believe the current City Council is demonstrating the resolve that will be necessary to deal with these issues, and make decisions looking at the long-term. Ultimately, the citizens of Culver City will decide on the value of the services provided to them, and what they are willing to pay to secure them.”

Like the passage of Measure EE, last year’s parcel tax to support the schools, it will be up to us to say what we want to support, and how we plan to support it. It’s our city, and all of the obligations, financial and otherwise, are ours.

It used to come to your mailbox, but those days are over. Saving paper, being green and expanding access, the Winter 2011 Culver City Living Recreation Brochure went online today. Please visit www.culvercity.org/CulverCityLiving to view …[READ MORE]

It’s an important moment when someone decides that the parking ticket is worth it. The city council meeting that convened on Monday May 3 was interesting for many reasons, but one of them stood out …[READ MORE]

In a memo to staff on Tuesday, May 18, P. Lamont Ewell, the interim city manager, was explicit about the need to lay off city staff. “As you are aware, the City of Culver City …[READ MORE]