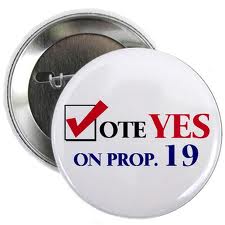 As a mother, as a lawyer, and as a taxpayer, I am more excited about voting in the November 2 election than I have ever been about a vote in my life.

That’s because the ballot provides an opportunity to reject and denounce what I know is one of the worst public policy mistakes in American history, namely, the prohibition of marijuana. The victory of Proposition 19 will get the government off the backs of adults who use it responsibly, and, by authorizing local governments to regulate and tax cannabis commerce, will provide a huge benefit to taxpayers. The significance of Proposition 19—if we don’t blow it—will resound well beyond the state.

As a taxpayer, I rejoice at the prospect that local lawmakers will be presented with a rare opportunity to actually fashion important policy, instead of having to follow state mandates, and to keep the revenue they collect. Communities that want nothing to do with regulating and taxing commercial cannabis need not bother, but those who see it as an opportunity for new revenue and jobs will have a splendid chance to bring this industry into the daylight where it belongs. California will truly become a laboratory of democracy.

As a lawyer, I delight in seeing the voters of California stand up to the federal government again in opposition to the calamity of prohibition. We did so the first time in 1932, when voters repealed the state’s alcohol prohibition laws by a vote of 3 to 1, notwithstanding that alcohol remained illegal under federal law. We did it again in 1996 when we passed the medical marijuana proposition, over the same objections we hear today from the feds, and we can do it again this November. Contrary to warnings, the sky didn’t fall then, and it won’t now.

As in 1932, Californians can take pride in telling the feds to take a hike when it comes to imposing its obsolete values on us. Every historian of drug policy knows that marijuana prohibition was enacted three generations ago as an instrument for the oppression of minorities, and, shamefully, it has served that function all too well.

As a mother, I am thrilled that this could open the door to more honest conversations with our children, instead of the tired old propagandizing against illegal drugs, with a deplorable silence on legal ones. Now, perhaps, children can be taught that drugs are all around us, and that they need to learn how to avoid problems with them.

There has been grumbling from the defenders of the status quo, as can be expected. A surprising number of Proposition 19’s opponents have not denounced the idea of legalizing marijuana, but instead just the particulars of this measure. I hope these nervous Nellies recall that Senator Ted Kennedy’s greatest legislative regret was failing to make the deal with Richard Nixon to reform health care in the early 1970s. His reason at the time: he did not think it went far enough. If we waited for a perfect initiative, a perfect bill, a perfect candidate, we would squander our chances to ever show leadership. In this case, the consequences of not passing the proposition include more waste; a bigger wedge between law enforcement and the communities that know marijuana prohibition is hypocritical and damaging; and continuing to abdicate all control to the criminals and cartels who have a monopoly over the state’s $14 billion untaxed marijuana market. We cannot afford to wait for something everyone will agree on.

That said, I have written and analyzed many laws, and Proposition 19 is well crafted. While, as with any new policy, the transition may not be entirely smooth, certainly implementation will be a drastic improvement over the status quo. Any lingering issues could be cleared up with simple tweaks in state or local implementing legislation or otherwise through the normal process of lawmaking. The proposition even includes a provision allowing for legislative amendments that further its aims. Indeed, a bill already has been filed by Assembly Member Ammiano to implement Prop 19 with a statewide framework for regulating many aspects of the legitimated industry.

We constantly hear politicians claiming to have the courage to make “tough decisions,” but somehow when it comes to marijuana they are largely disposed to making the easy call—to not antagonize the police, prison guards, and other politicized public employees who feed at the trough of prohibition. The tough call would be to tell the truth—namely, that there is no prospect that throwing more money at marijuana enforcement will make marijuana go away. It’s here to stay, like it or not.

Proposition 19 is a refreshing dose of common sense. I embrace it.

Hanna Liebman Dershowitz is an attorney who has taught legislation and statutory interpretation, and formerly served as general counsel and senior policy advisor to State Senator Rodney Ellis of Texas. She co-chairs the Legal Subcommittee of the Yes on 19 campaign.

Bringing the Culver City council campaign to a close, Crossroads will be giving the candidates one more chance to sum up. Candidate Robert Zirgulis spoke with Crossroads on April 5 at 10:30 a.m. about his …[READ MORE]

Karen Bass, Speaker Emeritus of the California State Assembly, has announced her support for Councilman Scott Malsin in his re-election bid for a seat on the City Council on the April 13 ballot. Bass called …[READ MORE]

Get Political – Pick Up the Phone

This is the last month the current Congress will be in session, but there is still important work to be done before lawmakers go home for the holidays. With one big push, we could accomplish …[READ MORE]