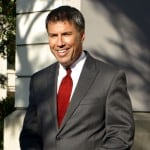 As the city council campaign comes down to the last few days, candidate Jeff Cooper sat down with Culver City Crossroads at Green Peas for coffee and some questions.

After the earliest campaign kick-off in memory, the Cooper campaign stayed active but low key until last month, when the lawn signs began to sprout in remarkable numbers. From the start, Cooper stayed on message, using his stump speech on every possible occasion until even he felt everyone had heard it. Now that his numbers are a bit more solid, he has opened up and begun to be a bit more spontaneous.

While he has been a on the Parks and Recreation commission and has been active in local government for years, the center of his success seems to be word of mouth. A long time resident, Cooper has been active with a number of organizations (Exchange Club, Senior Center) and has many friends; his friends have friends, and they have friends. when you stop to count noses, it’s a pretty large crowd. It remains to be seen whether or not enough of them will make it to the polls on Tuesday to assure a seat on the council. But in a tight contest, Cooper is leaning well towards the wire.

Plenty of Pancakes from Cooper Campaign

Over 120 people joined Jeff Cooper for pancakes and politics on Saturday, Jan. 30 at Veterans’ Park. Jeff’s friends and neighbors, as well as new supporters, from across the city came together to show their …[READ MORE]

Prop 16 – Voting on How You Want to Vote on Electric Utilities Of the six statewide ballot measures on our June 8 ballot, Prop 16 is the likeliest to have a direct impact on …[READ MORE]

How To Vote- Part 2 by Steve Gourley