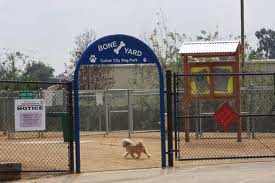 John Nachbar, the city manager signed an agreement on Friday, Oct. 29 to allow Plains Exploration and Production Company (PXP) to repair the leak on the abandoned oil well at the Culver City Dog Park. PXP anticipates beginning work next week. The repair procedure, approved by the State Division of Oil, Gas and Geothermal Resources (DOGGR), will take approximately two weeks to complete, if things go smoothly.  It will then take one additional week to restore the Dog Park to its prior condition, before it can be reopened for use.

While PXP had been rumored to be at the center of the problem, it is now confirmed. The abandoned oil well involved in the closure of the Boneyard  is a source of toxicity that Culver City’s dogs will be much better without.  Stay posted for updates.