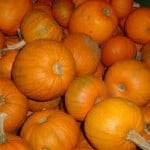 Halloween’s just around the corner. As you walk, bike, or drive around the city you can see spooky graveyards which have suddenly sprung up on neighbor’s lawns, jack-o-lanterns on front stoops and a plethora of spiderwebs and other Halloween decorations.
The Culver City Tuesday Farmers Market has loads and loads of pumpkins for sale. You’ll find those cute little mini-pumpkins, sweet pie pumpkins which are so great for cooking, and a host of larger pumpkins just waiting to be carved.

The answer is at the end of this article.

Are you planning a pumpkin-carving party? Are you buying pumpkins by the cartful so everyone in your family can make a Jack-o-lantern and home-made pumpkin pie?

Carving the pumpkins and seeing their scary, friendly, or off-kilter faces lit up with candles was always a fall highlight in our household. I don’t remember exactly when we started roasting the pumpkin seeds, but once we started it became an important part of our Halloweens. We didn’t know that pumpkin seeds were a great source of protein and zinc, manganese, magnesium, phosphorus, copper , potassium and essential polyunsaturated fatty acids. We just liked scooping out the seeds and strings, dunking them in large bowls of cold water and separating the seeds from the gunk (pulp and strings), and then showing off our orange, sticky hands before they were washed clean. Hot roasted pumpkin seeds fresh from the oven were a fitting reward for all that hard work on the jack-o-lanterns.

My childhood pre-dated the Harry Potter series, so I missed out on pumpkin juice. Luckily, the Potter and Hogwarts fans in your household can now enjoy pumpkin juice as they create their jack-o-lanterns. Take a look at these recipes for pumpkin seeds (pepitas in Spanish) and pumpkin-juice so you can keep all the pumpkin carvers in your household happy.

Simple Roasted Pumpkin Seeds (Pepitas)
Rinse pumpkin seeds in cold water and pick out the pulp and strings. Be water-wise and use a bowl rather than running tap water. It is easier to clean the seeds right after they’ve been scooped out and the pulp is not dried. Preheat the oven to 325 degrees. Lightly oil a baking sheet and spread the pumpkin seeds in a single layer on it. Sprinkle lightly with salt and bake until toasted, about 25 minutes. Check and stir the seeds once or twice while they are cooking. Let cool. Eat and enjoy or store in an air-tight container.

Preheat oven to 375. In a medium-sized bowl whisk together the egg white, sugar, cayenne and salt. Add the pumpkin seeds and toss well. Drain off any excess egg white (using a strainer) and place seeds in a single layer across a baking sheet. Bake for about 12 minutes or until seeds are golden. Sprinkle with a bit more sugar and cayenne pepper when they come out of the oven. Taste and season with more salt if needed.

In a medium-sized bowl whisk together the egg white, curry powder and salt. Add the pumpkin seeds and toss well. Drain off any excess egg white (using a strainer) and place seeds in a single layer across a baking sheet. Bake for about 12 minutes or until seeds are golden. Sprinkle with a bit more curry powder when they come out of the oven. Taste and season with more salt if needed.

Using a mortar and pestle or spice grinder, grind the tea into a fine powder. Set aside.

In a medium-sized bowl combine the butter and salt. Add the pumpkin seeds and toss well. Place seeds in a single layer across a baking sheet. Bake for about 12 minutes or until seeds are golden. Sprinkle with the ground tea. Taste and season with more salt if needed.

Using a juicer, juice the pumpkin. (If you don’t have a juicer, you can line a collander or seive with cheesecloth and force the pumpkin through it.) Add the pineapple and apple juice and stir. Add the honey and blend in a blender to ensure the juice is sweet throughout. Serve iced.

Using the same recipe, add ground cinnamon, ginger, and nutmeg or allspice to taste. If you have fresh ginger root, you can add it to the pumpkin before juicing. Start with a peeled 1” piece of ginger. If you prefer to use fresh spices rather than dried spices, you can add stick cinnamon to the apple juice and bring it to a simmer in a saucepan for 20 minutes or so. Remove from heat and let cool. Remove the cinnamon stick before adding the apple juice to the pumpkin and pineapple juice. (A number of sources have posted the sweet pumpkin juice recipe on the internet; I’m not sure whom to credit.)

Answer to trivia quiz. D, 1,725 lbs. Christy Harp’s 1,725 pound Atlantic giant pumpkin won the Ohio Valley Giant Pumpkin Growers annual weigh-off in October 2009. Thirty years ago, the world record for the largest pumpkin was 460 lbs. In 1981, Nova Scotian Howard Dill broke the record with a pumpkin weighing 226.80 kilograms (nearly 500 pounds). He patented the seeds used to grow this giant pumpkin, and continued to cross and recross this patented seed with other varities. By 1994, giant pumpkins were reaching the 1000 lb mark. In 2007, the world record holder weighed in at 1694 lbs. Two years later, the largest pumpkin weighed over 1700 pounds.

Katie Malich has already purchased one sugar pumpkin (great for pies and other recipes) and one pumpkin just waiting to be carved into a jack-o-lantern.

Where were you at 1:11 p.m. on 1/1/11? I was watching the reruns of the Rose Parade with friends. My health-conscious hostess’ spread was just the thing for those with New Years diet and health …[READ MORE]

Mothers Day is Sunday – Breakfast in Bed by Katie Malich

Breakfast in bed is a wonderful way to show the mother or mothers in your life how special they are. The whole family can get involved in preparing Mom’s special treats, since breakfast recipes range …[READ MORE]