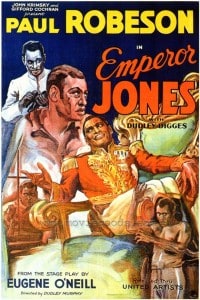 As a part of the mission to bring African-American culture and history to Culver City, the Mamye Clayton Library and Muesum offers a program of “Saturday Afternoon at the Movies” with this months offering of Emperor Jones (1933) directed by Eugene O’Neill, showing Sept. 25 at 4 p.m. at 4130 Overland Avenue in Culver City.

Emperor Jones (1933), the Broadway play brought to film by the playwright, stars Paul Robeson as the railroad porter Brutus Jones who gambles and commits murder only to be jailed,  and then escape the chain-gang by beating a prison guard. He makes his way to a remote island in the West Indies and becomes the “emperor.”

The next “Saturday Afternoon at the Movies” will be October, 30.