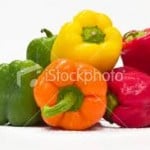 There’s the most amazing array of peppers at the Underwood Farms stand at the Tuesday Culver City Farmers Market. You’ll find a rainbow of colors and a generous assortment of shapes and sizes: light lemon yellow bells nestled with aubergine bells; elongated spring green peppers which curve and taper at the end; bright red sweet peppers; and wonderfully tender green peppers (who could ever eat a waxed supermarket green pepper after enjoying the fresh and fragrant unprocessed green peppers from the farmers market). Other stands, too, are bringing in marvelous sweet peppers at their mid-summer peak.
Living in Southern California, it’s easy to get blasé about year-round availability of chile peppers ranging from the mild (such as the waxy banana pepper), to the medium (think familiar green Anaheim) to the medium-hot (the compact dark green serrano) to the hot (Jalapenos and fresh red or green chili peppers) to the incinderary (those deceptively innocent looking small orange habeneros).
But local sweet peppers start coming to market in mid-summer, and the peak season tapers off by fall. So last week I bought an assortment of different sweet peppers and treated my friends to pepper-tastings. The concept was simple. First, wash, cut in half, de-seed and de-stem, and cut into strips. Then, arrange in a colorful display, and offer several dips on the side. I loved hearing people’s comments as they were surprised by the subtle differences and variety of flavors offered by the assortment.
Green bell peppers are actually just peppers harvested before they are fully ripe. Because they are harveted early, green bells are slightly less sweet than red peppers. The taste of ripe peppers can also vary with growing conditions and post-harvest storage treatment. That’s why farmers market peppers are the best. They are allowed to ripen fully on the plant in full sunshine. Peppers harvested green and after-ripened in storage are less sweet.
Peppers of all colors are a good source of most B vitamins, particularly vitamin B6. Peppers are also very high in potassium and high in magnesium and iron. Fully mature red peppers have more vitamins and nutrients and contain the antioxidant lycopene than immature green peppers. The level of carotene, another antioxidant, is nine times higher in red peppers. Red peppers also have twice the vitamin C content of green peppers.
Last week’s Fresh From the Farm included directions on how to roast red bell peppers. They are wonderful as appetizers, in pasta dishes and as accompaniments to meats. Green peppers bring color and flavor to oriental stir-fries and, across the globe, can invoke memories of grandparents long gone when stuffed with rice, ground meat or grains and slow cooked to perfection.
This week’s Fresh From the Farm contains recipes from around the world where peppers are an important ingredient, but often in a supporting – not starring – role.

The Tuesday afternoon Culver City Farmers Market is held from 2 to 7 pm on Main Street between Venice and Culver Blvds.

Katie Malich, unlike Peter Piper, has not eaten a peck of pickled peppers. She prefers hers in salads or in stir-fries or as crudites or fire-roasted or stuffed with quinoa and pine nuts.

Move over, Farmville. E. B. White’s award-winning book, Charlotte’s Web, has been the quintessential introduction to farm life for generations of American children and adults. Wilbur the pig, Charlotte the spider, Templeton the rat, and …[READ MORE]

Spring’s in full swing at the Tuesday afternoon Culver City Farmers Market. You’ll still be able to find fresh English peas and fava beans. (Check out the April, 2010, Fresh From the Farm for fresh …[READ MORE]

Red, white, and blueberry! July is National Blueberry Month, so take advantage of the fresh blueberries for sale at the Tuesday Culver City Farmers Market and stock up. The blueberry is native to the northeastern …[READ MORE]