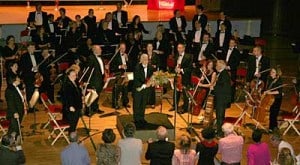 July 22 at 7 p.m. at Burton Chase Park, the musicians of the Culver City Symphony magically materialize in their summer setting- the next concert of the Marina del Rey Summer Symphony features the music of two 20th Century Russian composers with decidedly different styles: Prokofiev and Rachmaninoff.

Both composers received wide acclaim early in their lives, wheres for Prokofiev his acclaim was surrounded in controversy, and Rachmaninoff pursued a more conventional artistic path. While both composers were remarkable pianists, their piano style is indicative of their approach to composition.

Prokofiev’s playing, like his music, was sharply rhythmic and at times motoristic. His works are tonal, but his themes, while extremely lyrical, have sudden and strange changes within the phrase. The themes are memorable, and the harmonies unconventional, but it is a unique voice which remains fresh.

Rachmaninoff’s piano playing was noted for its grandeur and legato phrasing. A more conservative composer in his harmonies, phrasing and structure, his long-lined themes have remained popular from the beginning of his artistic life. His music is that of a Romantic with deep nostalgia.

Both Russians fled their native land due to the oppressive Soviet Union government. However, after years as an exile, Prokofiev returned to Russia, to a relationship with the government which was less than fulfilling. Rachmaninoff lived in Switzerland before settling in Beverly Hills, which would become his last residence.

The piano concerto and symphony are both large scaled works, and show the differences in the composer’s style. The sharp, biting, driven piano concerto of Prokofiev; and the long lined, very broad and melodic symphony of Rachmaninoff.
Burton Chace Park, 13650 Mindanao Way, Marina del Rey, is one of the most unique settings for  concerts, but since it is along the water, (and this is the semi-desert of Southern California,) once the sun goes down, the temperature can drop. While it has certainly heated-up since the last concert, it is always a good idea to bring warm clothing as a back-up to make yourself comfortable as you listen to these exciting concerts in a remarkable setting.

For more concert dates, times and location, parking and buss information, and for program information, please visit our website:Culver City Symphony Orchestra and then go to the “News” page: News from the Culver City Symphony Orchestra. At the News page you can read the program notes for this concert. Program notes will not be available at the concert. You can download the flier for the concerts at Burton Chace Park:Flier for the Summer Concert, or visit the Department of Beaches and Harbors, County of Los Angeles website for additional information: Department of Beaches and Harbors

These two seasons of concerts, Summer in the Marina and Winter in Culver City, inform each other, inspire each other, and continues to present this wonderful orchestra to the community. Enjoy the music.

Culver City Symphony – Save the Date

The Culver City Symphony Orchestra will present it final concert of the 2010-11 Season: “Season’s End – Moscow Bound.” The concert is set for Saturday, June 11 7:30 p.m., at Veteran’s Memorial Auditorium. This concert …[READ MORE]