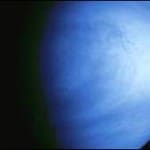 Sky Treats for Your Summer Pleasure…

An array of five of the sky’s leading lights gather together over the western horizon on mid-July nights. Venus, the dazzling “evening star,” is sneaking past Regulus, the brightest star in the constellation of of Leo, the lion. Venus was well to the lower right of Regulus as July opened, but the planet is moving to the upper left of the bright star.

The crescent Moon joined this bright pair on July 14, forming a triangle with Venus and Regulus. The orange planet Mars and golden Saturn hang a little higher, to the group’s upper left.

HD animation and high-resolution images of this sky show are available online from StarDate magazine at http://stardate.org/mediacenter.

NASA and Microsoft Research are bringing Mars to life with new features in the “WorldWide Telescope” software that provide viewers with a high-resolution, 3-D map of the Red Planet.

The fully interactive images and new NASA data will allow viewers to virtually explore Mars and make their own scientific discoveries. New features include the highest resolution fully interactive map of Mars ever created, realistic 3-D renderings of the surface of the planet, and video tours with two NASA scientists, James Garvin of Goddard Space Flight Center in Greenbelt, Md., and Carol Stoker of Ames.

Garvin’s tour walks viewers through the geological history of Mars and discusses three possible landing sites for human missions there. Each landing site highlights a different geological era of the planet. Stoker’s tour addresses the question “Is there life on Mars?” and describes the findings of NASA’s Mars Phoenix Lander.

“Our hope is that this inspires the next generation of explorers to continue the scientific discovery process,” said Ames Center Director S. Pete Worden.

To learn more and download the WorldWide Telescope, visit:
http://www.worldwidetelescope.org

For more information and images of Mars, visit:
http://hirise.lpl.arizona.edu

At 2:30 p.m. on Saturday, July 24, you can explore a new Universe as surveyed by an infrared telescope in space. Dr. Edward L. (Ned) Wright, Professor of Physics and Astronomy at UCLA, will speak on “Exploring the Universe with WISE” in a lecture at the Altadena Public Library.

The Wide-field Infrared Survey Explorer (WISE) was launched in December 2009, and its all-sky survey began in mid-January 2010. WISE is expected to detect hundreds of millions of stars and galaxies, including millions of ultra-luminous infrared galaxies and quasars; hundreds of thousands of asteroids; and hundreds old cold brown dwarf stars. This orbiting telescope takes more than 7,000 framesets per day, with each frameset covering 0.6 square degrees of sky.

The lecture begins at 2:30 p.m. It is free of charge, and all are welcome. Refreshments will be served before the talk, beginning at 2:00 p.m. The Altadena Public Library is located at 600 E. Mariposa Street in Altadena, two stop signs west of Lake Avenue at the corner of Mariposa and Santa Rosa Avenue (“Christmas Tree Lane”).

Many images of the infrared sky taken by WISE can be found at: wise.astro.ucla.edu.

The layered geologic past of Mars is revealed in stunning detail in new color images returned by NASA’s Curiosity Mars rover (mars.jpl.nasa.gov/msl), which is currently exploring the “Murray Buttes” region of lower Mount Sharp. The …[READ MORE]