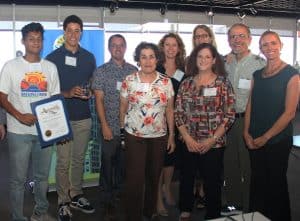 BCR also appreciated the significant contributions of the entire Culver City council and staff; the Cities of Santa Monica and Manhattan Beach; many community members and students, and its approximately 20-member coalition, including Heal the Bay, Surfrider Foundation, The Bay Foundation, 5Gyres, Sierra Club, Grades of Green, Californians Against Waste, LA Waterkeeper, and the Culver High BCR Club.