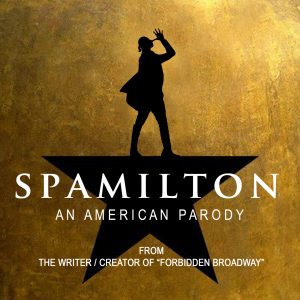 “Spamilton” celebrates and satirizes the Broadway blockbuster with a versatile cast of five. Marilyn Stasio of Variety mused, “Hip-hop, Broadway showtunes, Viennese waltzes — is there anything this guy can’t write? No, not ‘Hamilton’ creator Lin-Manuel Miranda, but Gerard Alessandrini, whose ingenious parody ‘Spamilton’ simultaneously salutes and sends up Miranda and his signature musical.”

And Ben Brantley said “This smart, silly and often convulsively funny thesis, performed by a motor-mouthed cast that is fluent in many tongues, is the work of that eminent specialist in Broadway anatomy, pathology and gossip, Gerard Alessandrini.”
Previews Begin November 5. Opens November 12 at 6:30 p.m. Through December 31, 2017. Sunday through Saturday at 8 p.m.; No Monday performance. Regular Performances (November 14 through December 31): Tuesday through Friday at 8 p.m.; Saturday at 2 and 8 p.m.; Sunday at 1 and 6:30 p.m. No Monday performances.