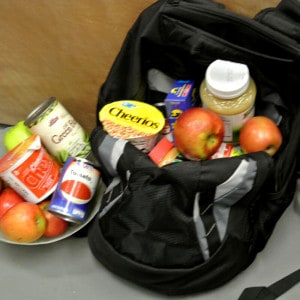 If you were shopping for groceries at Pavilions over the weekend, you saw the volunteers for the CCUSD Backpacks Program having their most successful weekend food drive ever. Jamie Wallace noted, “Culver City came through with overwhelming generosity. This weekend’s food drive brought in approximately $9,250 worth of food, monetary donations, and gift cards.”

Donations included $650 in gift cards from Subway, Vons and Target for families, and almost $1,300 in cash donations for the program.

Wallace enthused “This is the most we have ever collected in a food drive! Our last maximum was $7,600. We cannot thank our hardworking volunteers enough, especially Bob Wallace and David Stout for moving the food over to the pantry and putting it all away. To Albert Vera, Kim Griffin, Rohan Jain, PTA District Council President Heidi Pancake, and CCHS student Andre for volunteering on BOTH days. We had an amazing crew of helpers on Saturday and Sunday.”

Megan Rawls and Jamie Wallace offered thanks to everyone who worked, who donated, who said a kind word, who helped prove that we are indeed a city of kindness.