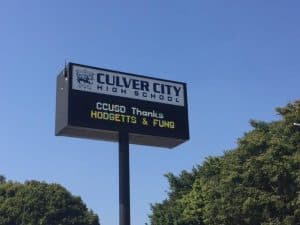 While the CCHS Marching Band played on the sidewalk, those who looked up might have noticed a different sort of announcement on the electronic marquee above the school. “CCUSD Thanks Hodgetts & Fung” was a bit of applause to the architecture firm that was spearheading the renovation of the historic Robert Frost Auditorium, and September 20 was the day to celebrate the ‘topping off’ of the new arch that would define the interior of the performance space.

Also being applauded were the six new benches of the Legacy Project at the front of the school, each one dedicated to the district’s five elementary schools and one more with the district’s motto, “Success for All Takes Us All.” A nearby tree had been transformed into a work of art for the occasion; a ‘wishing tree’ with tags added as both young and old wrote down their wishes and  hopes for the future, an connected them with colored ribbons to be a moving monument to the moment.

Small group tours were led through the auditorium, which is still a live construction site, so hard hats and safety glasses were included. Chris Dunne of Balfour Beatty noted the changes to the interior; seats were removed to make way for the base of the proscenium arch, and all the remaining seats were being completely refurbished with new powder coating, new upholstery and springs. The arch also meant that rather than  two doors on each side of the auditorium there will be one entrance/exit per side.

With both the Frost and the Legacy Project in focus, the ceremonies marking the occasion included remarks by both Interim School Superintendent Leslie Lockhart, and Mayor Jeff Cooper noting the 100th anniversary of the incorporati 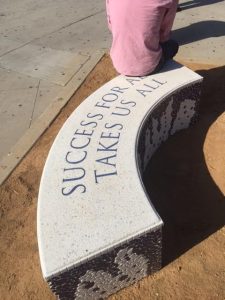 on of the city. Associated Student Body President Viana Valverde noted “It really shows how close knit our community is, and our students see ‘Culver Pride’ wherever we go. We hope that future generations will be using and appreciating those benches.”

During the 2016-2017 school year, all 4th and 5th grade students were asked, “What does Culver City’s Centennial mean to you?” The final decision to create mosaic benches outside the high school emanated from the desire to produce a functional piece of art, and to place it a public space that could be enjoyed by the largest concentration of people.

Ms. Fattorni explained, “The Centennial Legacy Project mosaic benches installed outside of Culver City High School symbolize the nurturing growth provided by CCUSD’s five elementary schools to the student population as they continue through their secondary school years, and into life after high school. The benches commemorate 100 years of Culver City history, by focusing on the strength of our schools, one of the city’s greatest sources of Culver pride.” 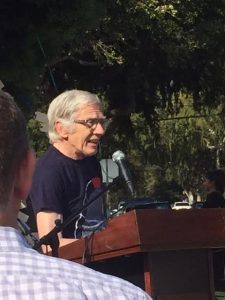 The high point of the day’s ceremonies were the remarks by Craig Hodgetts, who addressed the crowd wearing his commemorative t-shirt celebrating the day. He noted the Frost’s historical and architectural eminence by calling it “The Chemosphere of auditoriums,” comparing it to the noted modernist house in Los Angeles.

“The school board that took this on in 1963 did something that had never been done, and that took vision and courage.” Noting that the building was still a ‘stealth’ treasure, as it was so unique and less famous than it deserved to be, Hodgetts offered “If it weren’t for these community bonds and the way you all love one another, it might still be a stealth phenomenon.”

Comparing the Frost to modern-style buildings in Rome and Mexico City, he noted the ‘folded plate’ roof as a work of internationally important architecture.

Hodgetts also thanked the office of the State Department of Architecture, smiling  and saying that when things were getting challenging last year and it looked as though the project might not be realized, state official Chet Widom had stepped in to be supportive, specifically because his grandson had performed at the Frost when he was a student in Culver City.

Also lauded was sound design expert Robert Scales, the award winning film and game composer, who Hodgett thanked more than once in his remarks for his assistance with the auditory aspects of the work. 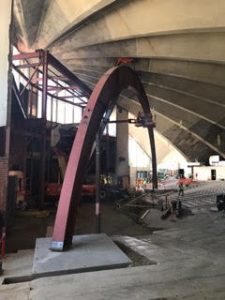 When the last piece of the arch was put into place on Friday, September 22, 2017, it was a creative milestone for the city, the schools and the centennial.

Completion of the renovation is currently scheduled for May 31, 2018.