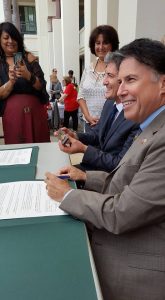 It was a crowded and festive scene on Jasmine Avenue Tuesday evening September 19 as the Sister City committee welcomed the delegation from Capo d”Orlando at the start of a ten day visit to complete the process of joining Culver City and Capo d’Orlando in sisterhood. A potluck party hosted by long time Sister City supporter Mike Cohen was attended by members of the Culver City City Council – Mayor Jeff Cooper, Vice Mayor Thomas Small, and Council members Jim Clarke and Meghan Sahli-Wells, along with dozens of Sister City friends and committee members.

The relationship warmed up this past summer when several members of the council visited Capo d’Orlando on the island of Sicily in Italy.

As a part of the Centennial Celebration at City Hall on September 20, the relationship was cemented and formalized with signatures by Mayor Cooper and the Vice Mayor Carmelo Galipo of Capo d’Orlando. The delegation will be visiting Culver City for the next week.