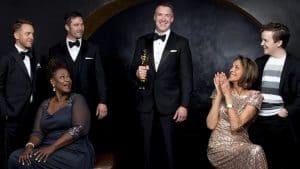 Paul Rudnick’s new play “Big Night” had its launch at the Kirk Douglas Theater last weekend, and while it takes on some very big ideas with great humor, it falls short of satisfaction.

“It’s an honor just to be nominated,” is the cliche that comes back every ten minutes, and of course as a show biz savvy audience, we know how true that isn’t. It’s about winning. But what about winning?

The big night in question is Oscar Night, and our leading man is a nominee for Best Actor in a Supporting Role. In a hotel suite almost littered with gift bags, bottles of champagne and floral arrangements, he’s talking with his (young, new) agent about the unreality of the accomplishment. One by one, family members arrive to present their own agendas as to how this moment needs to be put to use.

There’s a twist that should not be revealed (and so I won’t do that) but it is both the strength of play and it’s biggest challenge that it takes on such a serious and topical crisis with wit and humanity. Even if it’s the biggest night of your professional career, will you allow your humanity to eclipse your image? Is that even a good idea?

The cast is good, the jokes are timely but the direction by Tony Award winner Walter Bobbie doesn’t seem to have helped much. Big Night just doesn’t feel that big.

A series of minor difficulties that were so big they became distractions; Wendie Malick may have have taken costume designer William Ivey Long out for a sequin shopping spree – her sparkling gold dress almost steals the show on it’s own – but it’s also an accurate reflection of the character, so it does work. And yet – even on a really loud character, that’s a really, really loud dress.

Casting Tom Phelan as a transgender boy who disdains straight actors being cast as trans characters – is the pot calling the kettle black here? What exactly is the point being made? While I am of the belief that actors are actors are actors, and I’m fine with an Asian woman playing Captain Kirk as long as she can really convince me that she is Captain Kirk. And I know that far too often, it’s the straight white actors who get cast to perform as gay characters or people of color, and that should change. Imagine a white actor in dark makeup giving a speech about how wrong it is for white actors to play black characters. I know, right?

Even more ironically, Brian Hutchinson as Michael, he of the the ‘best supporting’ nomination, becomes a supporting member of the cast in his own show. As the friends and family take over the suite, they also take over the action, to the point where Micheal is reduced to reacting rather than acting.

It’s a difficult dance to use a stereotype to take on the absurdity of stereotypes; even the baby agent has to confront himself over his show-biz versus reality choices.

Rudnick certainly knows how to sell a joke; the audience was laughing even after the plot twist. But the flavor of the play remained firmly in the pre-twist mode of shtick. There’s nothing wrong with having big ambitions. But if you are planning a big night, then the elements of profound, political and funny might not all want to be served on the same plate.