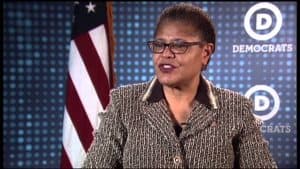 Culver City’s Congresswoman Karen Bass, who has met repeatedly with residents and city officials over the problem of increasing aircraft noise at nearby LAX, finally got a chance to propose six amendments to reduce the sound of giant aircraft landings before the House Rules Committee on September 5.
Her pleas for more funds to research solutions to reduce noise on planes and on air traffic noise reduction technologies fell on deaf ears, as Republican chair Pete Sessions explained that he had had a similar issue with a small local airport, but was able to negotiate with Southwest Airlines to solve it. He urged Bass to work with involved parties at LAX to solve the noise problem with them.
Despite Bass’s efforts urging Republican leaders to provide money for research on how to decrease the increase in noise that affects school children in classes, the health of residents, film crews seeking quiet and other businesses in Culver City and Los Angeles, the Republican majority blocked her proposed solutions a chance for a final vote on the House floor.
Bass promised to reveal the committee’s “shocking disregard for the impact these planes are having on neighborhoods in Los Angeles.” She called their move “alarming to say the least” and promised to share their decision on the floor of the House of Representatives. “I will not stop this fight,” she vowed.
“Congress must take action to address airplane noise and its harms. Increasing airline efficiency must not and cannot require the sacrifice of health and well-being of those on the ground.”