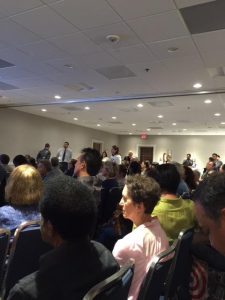 When HSH Management set up the first in a series of required meetings on September 14, 2017 at 7 pm for community input over the proposed Bristol Parkway Project, they offered a meeting room at the Four Seasons by Sheraton and set up fifty chairs. When more than 300 people showed up, it was clear that this was going to be a different kind of engagement with the community than the developer had foreseen.

Owing to community activists at both the Fox Hills Neighborhood Association and the Fox Hills Alliance, the room filled so far beyond capacity that the Sheraton was bringing in chairs and opening up walls for the first hour of the meeting.

While the developer and the hotel struggled to make things more accommodating, the crowd filling the room was never comfortable. Many of the people who attended showed very little patience with protocol, continually interrupting whoever was speaking, shouting over each other and breaking into side conversations.

It wasn’t complete chaos, but it wasn’t far from it. The anger over the proposed loss of the current retail amenities and the inclusion of more housing led to exclamations of terrible traffic, physical danger from speeding cars, and a pervasive sense that Fox Hills residents were not valued. 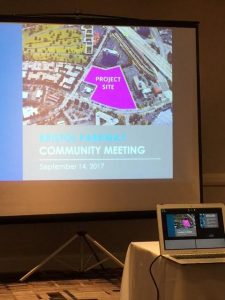 The lack of a microphone – they were only prepared for fifty people – made the presenters hard to hear, and the people shouting comments made communication worse than difficult.

By the time Mayor Jeff Cooper arrived,  the meeting had subsided into a series of questions and comments from the crowd, who wanted more information than could be had. HSH Management could not even offer a date for the close of escrow, and the proposed ratio of parking to residences was so far under the current city standard it seemed absurd. That the site is currently zoned only for commercial use requires that the city change the zoning for the location to make the proposal legal.

While the property is still in escrow and the preliminary plans are on file with the city, there will be more community meetings on the Bristol Parkway Project.