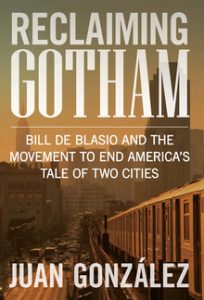 Celebrate the release of Juan González’s latest book with special event at The Actors’ Gang in Culver City.
In Reclaiming Gotham: Bill de Blasio and the Movement to End America’s Tale of Two Cities, Juan González explains how cities are becoming the center of progressive political change, and introduces a new generation of municipal leaders spurring this movement for grassroots reform.

The event is free and open to the public, but reservations are required. To reserve a seat, email your name with your ticket request to [email protected] . Reserved seats that are not claimed 15 minutes before show time will be released to the wait list.