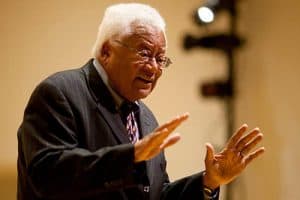 Responding to the exacerbation of socio-political tensions around the country and an increase in civil resistance, a veteran Civil Rights organizer is reviving a popular program aimed at sharing the lessons from successful movements of the past with advocates of current justice struggles.

“Many do not grasp that nonviolent direct action requires preparation, planning, strategizing, recruiting, and all the things that you need to do to have a campaign, including fierce discipline,” said Rev. Lawson in announcing the Institute’s return. “This doesn’t happen spontaneously. It has to be done systematically.”

As a friend and co-hort of Dr. Martin Luther King, Jr., Rev. Lawson led some of the Civil Rights movements most effective projects in the 1960s and 1970. Most notably, he organized sit-in campaigns at segregated lunch counters in Nashville, Tenn., which ultimately led to desegregation of the facilities.

Rev. Lawson hosted two popular institutes in Nashville in 2013 and 2014, but none since then. The current contentious political climate prompted him to reprise the project. A second institute is being planned, but its location has yet to be determined.

Participants in the Institutes will learn from case studies, interactive exercises, planning tools, academic research, and theoretical frameworks, taught by a faculty of scholar practitioners and facilitators. The UCLA Labor Center, the Liberty Hill Foundation, Arca Foundation, and the International Center for Nonviolent Conflict are the Institute’s partners.