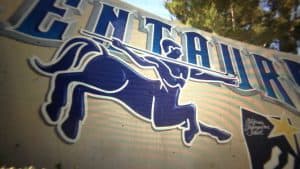 Because of most districts limited athletic budgets, most good athletic programs have to fund raise to help offset large costs to run their programs. Since Culver City does not have crowds of 4,000 and 5,000 for its football games, the school has to rely on sponsors and major sponsors to help keep a competitive program going. Fortunately, we are blessed in Culver City to have a caring and involved community that likes to help out many of the athletic programs as well as other worthy programs.
Recently, noted local realtor Michael Morabito of The Agency, Beverly Hills, generously bought the largest sponsorship in Culver City football history. With his donation, the school approved for him to be the first official sponsor to have his name and company hang a banner on the football scoreboard year-round.  “If any of the football players’ parents decide to sell their homes and I represent them, I will donate a portion back to the football program,” Morabito said. He will be formally introduced to the team within the next week or so.
One of Mike’s local clients is former Centaur quarterback and local Culver City builder Darin Dolce. Darin recently returned from Colorado where he ran his company but decided to return to his roots and buy and build homes in and around the area.
Mike has been a successful realtor for several years and represents buyers, sellers, builders and investors in Culver City, Westside and Palisades area. Mike is an easy-going guy, who works hard and understands the need to give back to the kids and community to show his support and involvement to make it a better city.
Another new major sponsor for the Centaur football program is Culver City Honda. Culver City Honda gave a generous donation of $2,000 and with that it will display one of its cars at a home game. General Manager of Honda, Todd Daciek, recently met with Coach Goodyear and was very excited to be a part of the Culver City football sponsorship program. He was instrumental in working with the corporate office to explain the importance of community involvement, and this is why Honda has decided to partner up with the Centaurs. He is looking forward to meeting with players and their parents and invites all people out to test drive the new Honda cars and come to the games to see one of the cars up close and personal. Culver City Honda is conveniently located in the downtown area on Washington Bl. just east of The Culver Studios.One of the longest major sponsors has been Sees Candies, who has consistently donated to our football program for over 10 years. Sees, as everyone knows, makes great chocolate candies and other confections and they’re conveniently located on the east side of Culver City near Rodeo and La Cienega near the Target store.
Also, another longtime sponsor of Culver City football, who has been a generous supporter over the last 10 years is Sal Gonzalez of Culver City Volvo. Culver City Volvo has had a major expansion on its property and would like for you to come out and meet its salesmen and test drive one of its cars. It is located on corner of Washington and Culver.
A few other recent new sponsors are Fawad Ursani of 7-11, located near the school and football stadium on the corner of Braddock and Sepulveda. He has another location on Sepulveda across the street from Sorrento Market. Fawad has been generously donating time and money to the Culver City football program.
Another generous sponsor is Grey Block Pizza, who donated the Culver City baseball scoreboard. Although Grey Block Pizza recently sold its store in Culver City, it still operates a few other local restaurants and still wanted to be a contributor of the local program.
Two recent new additions to the major sponsorship level ($500 or more) include a new gaming company in town called Blue Screen Gaming, a computer game room recently opened on Washington Bl. near Cox Paint. They invite team gamers and gamers of all ages to check out its new store.
Another new major sponsor is the Amitai team, which consists of Roni and Lee, a former tennis team Centaur. Roni and Lee have many sales primarily in Culver City and understand the involvement of giving back to the community.
Longtime realtor Dannie Cavanaugh last year jumped up to the major sponsor level. His father founded the company over 50 years ago. Dannie always given back to the community.
Alumnus and attorney David Bass and insurance broker Michelle Maher Ford have been recent major sponsors of our football program as well as Robert Ford of Ford’s Plumbing. Centaur alumnus Lauren Reynolds, founder of At-Home Nursing Care also sponsors. Finally, other major sponsors are the Police Officers Assoc. and Firefighters Assoc., Sandy Segal Health Center, Culver City Education Foundation, and Kevin Ross, father of football player, Charles Ross.
The football program would also like to thank Titos Tacos, Campos Burritos, Tub’s Chili, and Flavor Table for continuing to feed our hungry football players during the upcoming two-a-day practices.
Of course, we want to thank all of the other generous sponsors too numerous to mention, but would encourage you to come out to a football game and buy a program and patronize their establishments. Culver City football program is on a mission to win its third league title in a row and first CIF championship since 1978.