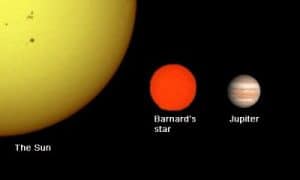 The National Science Foundation’s Arecibo Observatory and the Planetary Habitability Laboratory of the University of Puerto Rico at Arecibo have joined the Red Dots project in the search for new planets around our nearest stars. This new collaboration will simultaneously observe in both the optical and radio spectrum Barnard’s Star, a popular star in the science fiction literature.

Barnard’s star is a low-mass red dwarf almost six light-years away and the second-closest stellar system to our Sun after the Alpha Centauri triple-star system. There are hints of a possible super-Earth mass planet in a cold orbit around this star.

The Arecibo Observatory’s giant radio dish will be used in a new campaign to observe nearby red dwarf stars with planets. The purpose of this campaign is to detect radio emissions from these stars, such as from flares, to help characterize their radiation and magnetic environment and any potential perturbations due to other bodies. These perturbations might reveal the presence of new sub-stellar objects including planets.

Barnard’s Star will be the eighth red dwarf star to be recently observed by the Arecibo Observatory. Results from Gliese 436, Ross 128, Wolf 359, HD 95735, BD +202465, V* RY Sex, and K2-18 are currently being analyzed. These observations are led by Prof. Abel Méndez, Director of the Planetary Habitability Laboratory of the University of Puerto Rico at Arecibo in collaboration with Dr. Jorge Zuluaga from the Universidad de Antioquia in Colombia.

The first extrasolar planets were discovered from the Arecibo Observatory in 1992. They were three small planets named Draugr, Poltergeist, and Phobetor around the Lich pulsar, a fast-rotating neutron star that emits a beam of electromagnetic radiation. The first planet around a Sun-like star was later discovered in 1995 and today we know of more than 3,500 of them.

The first and only time that Barnard’s Star was observed from the Arecibo Observatory was during the SETI Institute’s Phoenix Project (1998-2004), as part of SETI’s search for extraterrestrial intelligence. The new observations are in a different frequency (4 to 5 GHz) where radio emission from stellar flares have been observed in other similar or cooler objects. This is the first time Barnard’s Star is seen with such frequencies and sensitivity.

Barnard’s Star is named after its discoverer, E.E. Barnard, a pioneer American astronomer who used Yerkes Observatory’s 40-inch refracting telescope in the early 1900s to photograph the nearby stars in the Milky Way Galaxy and create an atlas of their positions and distances. To determine the distances to the stars, he would photograph the same star-field in both the spring and fall—and then measure changes in a star’s position compared to other nearby stars in the two seasons as the Earth moved in its orbit around the Sun.

He found that one star, a “red dwarf” later named for him, had an extreme change in position. A simple calculation using trigonometry showed it to be only about six light-years away from us—the closest known star after the Alpha Centauri star system.