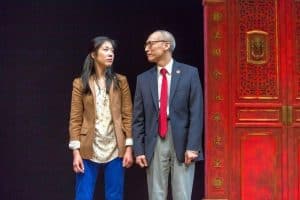 Center stage there is a large door, painted a color known as Chinese Red. The ornate gold markings are Chinese characters. The King of the Yees takes us through this door and into a mulitverse of concepts about family, identity, history and politics. Lauren Yee has created a charming play; a tribute not just to her own father – the royalty of the title – but to her ancestors, all the ‘cousins’ and the significant struggles of being Chinese in San Francisco, in California, and in the theater. Her use of comedy, language and timing is so sweet, even the bitter facts of racism and oppression are presented in ways to bring laughter.

There is some knowledge I was glad to have before I sat down – knowing the political background on Leland Yee and ‘Shrimp Boy’ seemed to give me some advantage. There were people at intermission utterly innocent that these were real news events, and not purely theatrical inventions.

There is some knowledge I was sincerely embarrassed to lack. I lived in San Francisco and I never thought of Chinatown as anything but a tourist trap. But it began as a ghetto – the only part of the city where the Chinese could legally reside. That tall red door begins to look very different in the understanding that it’s not an attention grabbing showplace for hawking wares – it’s a shelter for those who are threatened.  Chinatown is so present and vivd, it’s almost another character in the play.

Taking on the stereotype of ‘Chinese’ from the inside, Yee offers both a critical eye and a loving understanding. How we see ourselves comes directly from how our family sees us, and what they want for us and from us can’t be denied without first being discussed. Those conversations take place in every family, but how this father and daughter discuss life is a reflection not just of ethnicity but humanity.

Yee uses every theatrical trick in book and makes them all fresh and funny; actors talking ‘backstage’ in some candid green room confessions, a wild parody of slow motion fight scenes (think of the most cliche of Kung Fu/martial arts style) a hero’s quest with a sunset deadline, and fortune cookies falling from the ceiling into the audience.

Calling this production rich is an understatement. Yet it begins with the most simple theater imaginable – two actors onstage. After a wild tour through almost every aspect of history, family and connection, it ends that same way, just two actors onstage. With a door – a door that might open or close according to knowledge we don’t even know that we possess.

For tickets, go to www.centertheatregroup.org/tickets/kirk-douglas-theatre/2016-17/king-of-the-yees/?gclid=CIez1vqIltUCFRKXfgodztAG5A