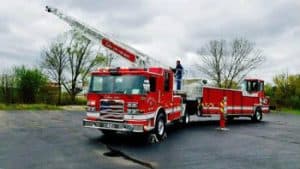 The Culver City Fire Department took delivery of a new Pierce fire truck this month. The 2017 Pierce Arrow XT 100’ Tiller will take the place of the 2003 American La France Tiller in the coming weeks. The 2003 frontline truck will be moved to reserve status and the 1990 Spartan LTI reserve truck will be retired from service.

Truck42LadderA team consisting of A Shift Battalion Chief Ken Powell; A shift engineers: Dave Gardner, Tim Carr, Mike Spaseff, and Louis Louie; A Shift Captain Tim Sullivan; and members of the Transportation Department: Paul Condran, Scott Newton and Kenny Spring, compiled specifications for the new truck and monitored the manufacturing of the apparatus over the course of a year. The new truck is built on the Arrow XT Tiller chassis and powered by the Cummins ISX15, 600 hp, 1850 lb-ft, EPA 2016, custom engine, and Allison 5th generation, 4500 EVS transmission. Starting with the chassis, this new truck was entirely built to Department specifications in Wisconsin. The truck committee met in Wisconsin for a pre-construction meeting in July 2016, a mid-construction meeting in March 2017, and the final inspection meeting in May 2017.

In addition to meeting NFPA 1901 and ISO requirements, the new truck boasts several features that will benefit the efficiency, effectiveness and safety of service delivery to the Culver City community.

The truck is the first fire apparatus in the Culver City fleet to utilize the Diesel Exhaust Fluid System. The 2013 paramedic rescues currently utilize this technology, which greatly reduces nitrogen oxide emissions into the air without compromising the power and torque of the engine.
In addition to maximized storage space, the truck has more roll out compartment trays for faster and safer removal of equipment.
It has a built-in LyfePulley rescue system for high angle and low angle rope rescue. The truck has movement controls at the base and tip of 100’ ladder. The aerial ladder can also function as a crane with a 500-pound load capacity.
The tiller operator now has rear and side view cameras to reduce blind spots and allow for safer maneuverability.
The truck has more efficient and brighter scene lighting. Each of the six 12-volt lights now emits 20,000 lumens and eliminate the need for a bulky built-in generator.
The new truck has a portable generator, which can power the truck for extended periods of time or be utilized away from the truck to power other tools and equipment such as portable lighting or fans.
The truck has a 100-foot truck mounted extension ladder, which is able to reach the equivalent of up to eight stories high. This allows firefighters to access or egress a building from a significant height and also to attack a fire from above. The aerial ladder is capable of allowing firefighters to direct an elevated master stream of up to 600 gpm from the tip of the ladder. In addition to the aerial ladder device, the truck is also equipped with over 200 feet of ground ladders, heavy rescue and auto extrication equipment, emergency medical services equipment and many other types of rescue equipment to handle various calls for service throughout the City.

The truck company is supervised by a captain and is staffed with an engineer and two firefighters. Two operators are required for safe handling of this vehicle—an engineer driving the front and a tiller operator controlling the rear. As the rear wheels turn independent of the front wheels, the truck has increased maneuverability and can more easily navigate through smaller streets and make tight turns in compact areas.