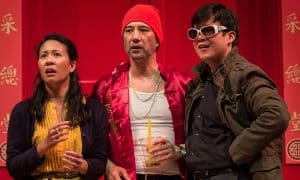 The world premiere production of “King of the Yees” will open at Center Theatre Group’s Kirk Douglas Theatre on Sunday, July 16 at 6:30 p.m. Written by Lauren Yee, directed by Joshua Kahan Brody and produced in association with Goodman Theatre, “King of the Yees” will continue through August 6, 2017.
The cast includes, in alphabetical order, Rammel Chan, Francis Jue, Angela Lin, Stephenie Soohyun Park and Daniel Smith.
The creative team includes set design by William Boles, costume design by Izumi Inaba, lighting design by Heather Gilbert, sound design by Mikhail Fiksel, projections by Mike Tutaj, casting by Adam Belcuore, CSA and Erica Sartini-Combs, and dramaturgy by Tanya Palmer. David S. Franklin is the production stage manager.
For nearly 20 years, playwright Lauren Yee’s father Larry has been a driving force in the Yee Family Association, a seemingly obsolescent Chinese American men’s club formed 150 years ago in the wake of the Gold Rush. But when her father goes missing, Lauren plunges into the rabbit hole of San Francisco’s Chinatown to confront a world both foreign and familiar. “King of the Yees” is a joyride across cultural, national and familial borders that explores what it means to truly be a Yee.