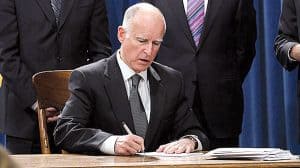 Specifically, Senate Bill 355 would end requiring innocent defendants to reimburse the courts for the cost of appointed counsel – by only charging those who are convicted.

“Under current criminal law, a low-income, homeless or impoverished person who is accused of a crime that they did not commit can still be ordered to pay the costs of a court-appointed attorney,” Sen. Holly J. Mitchell of Los Angeles said. “We are pleased to have the governor support our #EquityAndJustice reforms. We are hopeful that he will continue to be a partner as the remaining #EquityAndJustice bills make their way to his desk.

“Together we can bring compassion, reason and greater social awareness about the true costs of a criminal justice system that for too long has followed policies that created and perpetuated a cradle-to-grave prison pipeline.”

SB 355 is the one of seven bills jointly sponsored by Mitchell and Lara that mostly addresses how California’s criminal justice system treats youth and young adults.