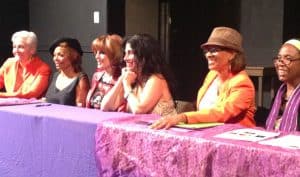 For one very special night, the Los Angeles Women’s Theatre Festival (LAWTF) comes to Culver City for a unique performance on Sunday, July 30, 2017 at 7:00 p.m. The venue will be the Veterans Memorial Building, 4117 Overland Ave., Culver City, CA 90230.

The evening is hosted by Karen A. Clark singer-songwriter-poet who has performed three of her solo shows with Los Angeles Women’s Theatre Festival. She serves on the Festival’s Board of Directors.

The theme for the evening will be Defining Moments. Four of LAWTF’s encore performers will be featured. Works are excerpted and include:

CARLA DELANEY in Voices. It’s not until this voice-over artist meets the surprising voices in her head, her heart, and her snotty respiratory system that she realizes the value of her own voice.

WENDY HAMMERS in I Survived Cancer and All I Got Was This Lousy President. This surviving and thriving excerpt from Wendy Hammers’ newest solo play follows her 2015 pancreatic cancer diagnosis the same week a reality show host announced he wanted to become the leader of the free world. A humorous and uplifting look at navigating one’s own health and wellness in the face of The Donald and disease.

CLARINDA ROSS in Spit Like A Big Girl. Award-winning actor and playwright Clarinda Ross shares her funny and poignant family story, inspired by the discovery of her father’s journals after his untimely death. Ross takes us on a bumpy journey through the back roads of her Southern childhood.

Defining Moments marks the LAWTF’s seventh consecutive annual program for residents of Culver City. This performance is made possible in part by a Culver City Performing Arts Grant with support from Sony Pictures Entertainment.