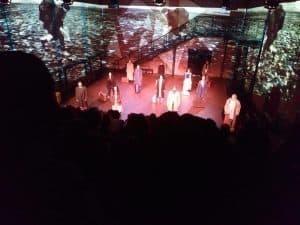 Immigration has vanished from the headlines and talk shows, but its reality has not. Learn more about it from actual refugees and their descendants tonight and Saturday as Culver City’s Actors’ Gang performs The Refugee Project, a spotlight on the flights, plights and insights of their cast members in the final leg of their Spring Season of Justice trilogy that began January 19 with the powerful Lyrics from Lockdown.
As always innovative, brave and out of the box, this final segment has been workshopped, with director Tim Robbins and cast innovating based on personal stories. “Every night has been different,” Robbins told the Thursday night oversold and packed-to-the-gills crowd. Each of the dozen cast members is a refugee, son or daughter of, or grandchild of, refugees. Each story is unique and told in their diverse languages.
“One night we had no English at all, and we wondered how that would work,” Robbins said. Emergency sirens on another night changed the direction of the play. Audiences followed the body language easily.
Starting with an initial normalcy, tensions heighten as suspicions rise. Unease becomes active alertness, actual planning and then a headlong race to safety. The cast crouches and scurries across the stage clutching suitcases, reminiscent of the heedless souls who braved the no man’s land between the Berlin Wall and freedom.
It morphs into one hazardous crossing after another in their seemingly endless search for a home. What becomes truly alarming is their reception – after weeks, months or years facing the dangers and privations of migration – when they get to somewhere that might be the end of their journey, and are rejected. Or accepted at the border and rejected once inside. Or allowed inside but rejected for jobs, housing, a community to belong to.
In one galvanizing, silent epiphany, they all stand alone, frozen with the communal knowledge that the endless lines, endless regulations, endless setbacks, endless indifference, is their new reality, that this is their promised land, their new life, and it may disappear. For the majority, there is nowhere else to go.
Enter caring agencies founded to help refugees navigate the deep waters of permits, regulations and bureaucratic snafus. Staffed by refugees and others kind enough to care, they are welcomed with open arms, reliable advice and smiling faces.
It is a road not travelled by most of us and a road that could get even harder, a thought to gnaw on from this immersion lesson in people looking for a safe home.

Acting classes for adults, teens and kids commence in July, capped by the wildly popular season finale of Shakespeare in the Park in August (title TBA). Call (310) 838 – 4264 or go to TheActorsGang.com/Training for more information.