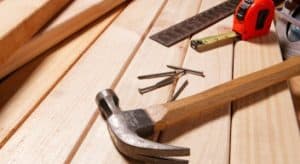 Last week, the rented fencing around a large vacant lot next to the west wall of the 405 on Globe Avenue was up, but someone had broken the padlock on the gate and left it half open.
In the eerie quiet below the bustling 405 freeway high above, there were no signs commemorating the festive ground-breaking a year ago that proclaimed the weedy location the future site of ten affordable homes, the largest build yet in a planned expansion into West LA by Habitat for Humanity, the global non-profit group that has been building homes for the working poor since 1976.
All that changed this week. Volunteers and staff mowed the weeds and on Tuesday erected tents and moved in furniture, hundreds of water bottles and hard hats. Volunteers will continue preparing for Friday’s Hollywood Build, when volunteers will mix with celebrities to frame the walls for the new homes, and H4H’s annual Power Women-Power Tools build on Saturday.
The land, sold by Caltrans to Culver City after the 405 freeway expansion more than a decade ago, could only be used for affordable housing. The city asked Habitat to help in 2005. Since then, negotiations with neighbors delayed progress until last year, when the city turned the land over to Habitat. It was predicted to take a year.
“(Work)’s been ongoing,” said Chris Untiet, Faith Relations Director for Greater Los Angeles Habitat4Humanity. “We’ve met two-thirds of our funding goals and expect to begin the foundation work this summer.” He said the need for volunteers to help construct the 10 homes will begin in the fall.
The unseen part of Habitat’s work – fundraising and organizing volunteer groups to help with the construction – has progressed quietly in the background. They held outreach sessions for prospective owners in January. Incomes must be more than $45,000 for a single or $68,760 for a family of eight. They learned they must give 500 hours of sweat equity building their own homes and attend classes on home ownership and finance. Applications, which closed January 30, take three to five months to process, so those chosen as new homeowners should hear soon.
Habitat has been working with Culver City on permits and planning for the construction of two duplexes and six single homes, with the water connections completed last week.
Foundations could be dug this summer while fundraising continues and volunteers are recruited. Part of the fundraising will be a silent auction this Friday and Saturday featuring prime sports tickets and travel opportunities.
A bevy of community and faith-based groups have worked to raise the $150,000 cost of each home. This phenomenally low rate for West LA is possible because the land is donated and much of the construction materials and labor are as well. “We work as one group in this project, but each is responsible for one unit,” Untiet said, “and people have been very generous.”
Those willing to donate money or volunteer their labor when the Culver City Globe Avenue project starts construction can register at the habitatla.org website, he said. “Just put ‘Culver City project’ in the comments box.”
Construction itself could take a year, so the fortunate families who move in likely won’t have to pack until 2018 or later.
Habitat is building at a record pace in Long Beach, announcing a 15-unit project in the Washington area recently. Globe Avenue is the second new homebuild Habitat project in West LA, three homes are being built in Inglewood.
“It’s been a journey,” Untiet said. “We are just completing our 800th new home in our 27 years in Los Angeles. That’s an incredible accomplishment.”