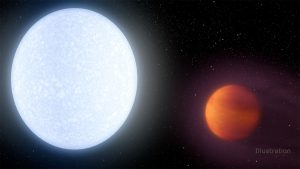 A newly discovered Jupiter-like world is so hot, it’s being vaporized by its own star.

With a dayside temperature of more than 7,800 degrees Fahrenheit, KELT-9b is a planet that is hotter than most stars. But its blue A-type star, called KELT-9, is even hotter—in fact, it is probably unraveling the planet through evaporation.

“This is the hottest gas giant planet that has ever been discovered,” said Scott Gaudi, astronomy professor at The Ohio State University in Columbus, who led a study on the topic. He worked on this study while on sabbatical at JPL.

KELT-9b is 2.8 times more massive than Jupiter, but only half as dense. Scientists would expect the planet to have a smaller radius, but the extreme radiation from its host star has caused the planet’s atmosphere to puff up like a balloon.

Because the planet is tidally locked to its star—as our Moon is to Earth—one side of the planet is always facing toward the star, and one side is in perpetual darkness. Molecules such as water, carbon dioxide and methane can’t form on the dayside because it is bombarded by too much ultraviolet radiation. The properties of the nightside are still mysterious—molecules may be able to form there, but probably only temporarily.

“It’s a planet by any of the typical definitions of mass, but its atmosphere is almost certainly unlike any other planet we’ve ever seen just because of the temperature of its dayside,” Gaudi said.

The KELT-9 star is only 300 million years old, which is young in star time. It is more than twice as large, and nearly twice as hot, as our Sun. Given that the planet’s atmosphere is constantly blasted with high levels of ultraviolet radiation, the planet may even be shedding a tail of evaporated planetary material like a comet.

The KELT-9b planet was found using one of the two telescopes called KELT, or Kilodegree Extremely Little Telescope. In late May and early June 2016, astronomers using the KELT-North telescope at Winer Observatory in Arizona noticed a tiny drop in the star’s brightness–only about half of one percent—which indicated that a planet may have passed in front of the star. The brightness dipped once every 1.5 days, which means the planet completes a “yearly” circuit around its star every 1.5 days.

Subsequent observations confirmed the signal to be due to a planet, and revealed it to be what astronomers call a “hot Jupiter”—the kind of planet the KELT telescopes are designed to spot.

Astronomers at Ohio State, Lehigh University in Bethlehem, Pennsylvania, and Vanderbilt jointly operate two KELTs (one each in the northern and southern hemispheres). Other telescopes are designed to look at very faint stars in much smaller sections of the sky, and at very high resolution. The KELTs, in contrast, look at millions of very bright stars at once, over broad sections of sky, and at low resolution.

“This discovery is a testament to the discovery power of small telescopes, and the ability of citizen scientists to directly contribute to cutting-edge scientific research,” said Joshua Pepper, astronomer and assistant professor of physics at Lehigh University in Bethlehem, Pennsylvania, who built the two KELT telescopes.