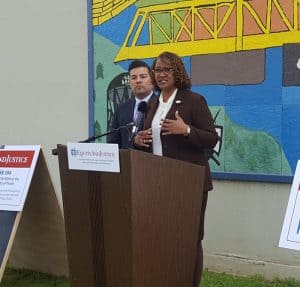 The California Senate today approved the last in a package of criminal justice-reform bills seeking to improve public safety, save taxpayers money and put greater emphasis on prevention, rehabilitation and maintaining family cohesion.

“We hope to bring compassion, reason and greater social awareness about the true costs of a criminal justice system that for too long has followed policies that created a cradle-to-grave prison pipeline,” Sen. Holly J. Mitchell said after the Senate approved Senate Bill 394, which would bring California into line with Supreme Court decisions ending life without parole for juveniles.

“California has treated young people accused and convicted of crimes as collateral damage for too long without recognizing the real costs of our flawed justice system,” Sen. Ricardo Lara said.

SB 394 was the last of four bills approved in the past two days that are part of a package of bills jointly sponsored by Lara and Mitchell that mostly address how California’s criminal justice system treats youth and young adults. The two Los Angeles-area Democrats unveiled the measures March 20 at a press conference. All are now to be considered by the Assembly.

The other three bills approved since late Tuesday are:

SB 190 – Ending Juvenile Fees
This would eliminate court fees on those found innocent of a crime.

SB 393 – Sealing of Arrest Records
Senate Bill 393 seals arrest records and remove barriers to employment for those arrested but not convicted of a crime and is sponsored by San Francisco District Attorney George Gascón.
SB 395 – Miranda Rights for Youth
This bill would require those under the age of 18 to consult with legal counsel before they waive their constitutional rights in interrogations with police.
The remaining bills in the #EquityAndJustice package are:

SB 180 – Drug Sentence Enhancements
This dollar-saving reform measure is a modest step toward enacting the bipartisan movement to end wasteful incarceration spending in favor of community reinvestment by amending the code section that doubles or triples the sentence for specified nonviolent drug offenses.

SB 355 – No Court Fees for the Innocent
This bill would provide that only those who are convicted of a crime are required to reimburse the courts for legal counsel fees.

SB 439 – Minimum Age for Prosecution
This bill would exclude children age 11 and younger from juvenile court jurisdiction and would promote the rights, health and well-being of the child by curbing premature exposure to incarceration.

Sen. Mitchell is chair of the Senate Budget Committee. A member of the Legislature for more than six years, she represents nearly 1 million residents of Senate District 30, which includes Culver City and much of Los Angeles. More at www.senate.ca.gov/Mitchell

Sen. Lara is chair of the Senate Appropriations Committee and was first elected to the Legislature in 2010. He represents nearly 1 million residents of Senate District 33, which includes Long Beach and the Southeast Los Angeles cities of Bell, Bell Gardens, Cudahy, Huntington Park, Lakewood, Lynwood, Maywood, Paramount, Signal Hill, South Gate, and much of Los Angeles. More at www.senate.ca.gov/lara