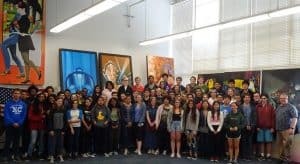 Culminating a prolific year of performing and musical growth, Culver City High School’s Academy of Visual and Performing Arts will present its annual Spring Music Concert on Friday, May 26. Due to the major renovation of the Robert Frost Auditorium, the concert will take place in the school’s gym on the main campus at 4401 Elenda St.
A special reception will begin at 6pm and will feature the AVPA Jazz Combo. As a “thank you” to the main supporters of the music program, light refreshments will be served. The Jazz Combo performs in the community for many events. This year, they won the Culver City Cup at the Centennial Block Party in September. They also recently performed at the Culver City Education Foundation’s Tribute to the Stars. The reception is also a celebration of the music program’s recent announcement of a GRAMMY Signature School Enterprise Award. Four schools in the Los Angeles area were chosen to receive a 3-year grant to support on-going programming needs in music.
The AVPA Orchestra, directed by Dr. Tania Fleischer, will feature piano soloist and CCHS senior Peter Marcus. He will perform a piano concerto by Mozart. Works by Biber and Bloch are also on the program, along with a full orchestra version of “Pirate’s Legend.”
The Concert Band will present a theme of American music, including pieces by Aaron Copland, Frank Ticheli, and James Curnow. Highlights include Copland’s Fanfare for the Common Man, Ticheli’s beautiful setting of Shaenandoah, and Curnow’s lush fantasy on America the Beautiful.
The Jazz Ensemble will perform two works associated with the centennial celebrations of Culver City – George Gershwin’s Strike Up the Band and a jazzy, hip-hop arrangement of the theme from I Love Lucy. They will also perform Stevie Wonder’s hit, “Sir Duke.”
The AVPA Chamber Singers will also perform repertoire from their recent appearance at Walt Disney Concert Hall with the Los Angeles Master Chorale High School Choir Festival. This includes a new arrangement of the Shaker tune “Simple Gifts” by Rollo Dillworth.
Admission is free; donations are welcome and benefit the Academy of Visual and Performing Arts. The Culver City HS Gym is located on campus at 4401 Elenda St., Culver City, CA 90230.