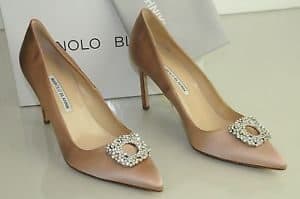 In Collections We Trust —

My iPhone flashed bedside with a video texted from my brother-in-law: it was a scene where my late friend Kari Fretham (type her name into the Culver City Crossroads search engine) rocks a pair of my mother’s shoes. My mom died in 1987, leaving bereft my father, her two daughters Ruth and Nancy, and a bevy of Bruno Magli shoes. My sister Nancy is also seen in the video, crying upon seeing the shoes.

Mom brought us up to love shoes. The DNA we received from both parents was infused with an obsessive gene; we pursue things we love with addictive passion. We are not only collectors, but we’re are literally defined by the artifacts, activities, places and even the ideologies we adore. Thirty years after my mom’s death, anybody who knew her would tell you that she loved… shoes, playing card games, Las Vegas, and would never consider voting anything other than a straight Democratic ticket. My dad, on the other hand, loved books, and – I recall – pens. I still have some of the nice wooden boxes of the pens he collected housing my little knickknacks. Dad was a “Life Master” of duplicate Bridge, and a grand master Chess player who competed at Santa Monica beach until the day he was admitted by ambulance to Santa Monica hospital, from where he eventually made his final journey to Hillside Memorial Cemetery. In addition to Las Vegas, dad loved Europe, especially Germany. Ideologically, he was a card carrying libertarian and a devout atheist. Shoe-wise, when dad died, I think we found two pairs of his shoes: the comfy pair with Velcro straps he’d worn on the day of the ambulance ride, and the dress shoes he’d left back at his apartment which we delivered to the mortuary (whether they were going to use them or not) with his one dress outfit: a gray suit with a red vest and a blue shirt and tie.

As for my own shoe fetish, I have a few incarnations of brand devotion. From recent times backward, any colleague (or student) at my workplace will tell you that I’m into Converse. I never wore them in my life until, ironically, Costco was selling Levi’s brand Converse knock offs for $15 a pair last year, and I bought the navy ones. My boss teased me saying, “those are just imitation Converse,” and it planted a seed in my head. On a subsequent trip to Ross, I bought my first pair: basic black, with a taste of turquoise on the tongue. The comfort and stylishness of that pair led me down the road of what has feverishly become a rainbow collection. I have a shoe container with twelve slots that are filled with: red, magenta, peach, gold, green, olive, royal, purple sparkle, light grey, black pattern, and the original black ones, with two more that don’t fit in the box: one pair of multicolored slip ons, and one pair of multicolored high tops. Period. And I am trying to stay away from the Converse outlets and Ross, because if I saw brown or yellow, or a combination thereof, I might lose my resolve around that “period.”

Prior to, and concurrent with, this Converse journey, I developed a penchant for a particular Israeli brand of boot called “Jafa” in the US and “Kaya” in Israel. The antithesis price-wise of the reasonable Converse, they are expensive if bought here, but I found where the outlet is in (Jaffa) Israel, and have been on somewhat of a rainbow quest with those shoes as well. They make sandals too, so I wear the Jafa’s in summer and winter, and the Converse in between.

And what of other types shoes and/or brand affection? I’ve worn Skechers for dancing for over fifteen years, and still wear my “Born” brand clogs and Mary Jane style shoes. Since I have so many choices in my shoe closet, I rarely wear out a pair, so I have had to gingerly begin to donate or give away some shoes, boots and sandals to make space for the new. Speaking of the shoe closet, I sheepishly brought friends in for a tour of it recently…to know me is to check out my shoes.

From shoes to collections, a friend visited my house for the first time recently and asked if the several menorahs I had on display were a collection, or just the ones I had. What a question for me! I responded the latter; although I keep them on display all year, they merely were ones I’d acquired as hand-me-downs from the family. I have never even bought one strictly for my own use (I’ve bought a couple as gifts to family members), although I do have six of them. As I told her, “collections, I’ve got, this just isn’t one of them.” I’ve written before about my coffee cup (mostly Starbucks) collection from worldwide destinations, but I am not sure if I’ve written yet about my curated Jewish book collection, or my Japanese books. I consider these more full-blown libraries than mere collections, and I’ve Facebook-archived what a friend refers to as a “shelfie” (a selfie of one’s book collection) of them. My sons know that they are never to be torn asunder, meaning separated, but may be kept, sold, or donated as one entity after my departure from this universe.

In my life, I’ve also collected Japanese art and ceramics, and scarves, among other items. There is a distinction, however, between active collection-ism and dormant collections. At present, the only active collection I pursue is my Jewish book library, and the Starbucks cups. And I will continue to buy every album that Idan Raichel or Sting – my two favorite musicians – ever produce. Dormant collections are not being added to with the purpose of, say, creating a rainbow. Dormancy means that I have acknowledged the beauty and symmetry of enough being enough.