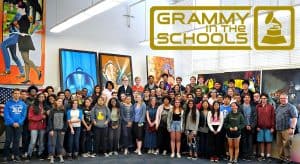 CCHS and AVPA Music Director Dr. Tony Spano was more than pleased. “I am thrilled to announce that our music program at Culver City High School was awarded a Grammy Signature Schools Enterprise Award! Our kids will continue to work with great professional artists because of this support!”

“The GRAMMY Signature Schools program is one of the most far-reaching of our key education initiatives and it has grown significantly since its establishment,” said Neil Portnow, President/CEO of The Recording Academy and Chair of the GRAMMY Museum Board. “Especially now, when we are engaged in a critical national discussion about the importance of the arts and the role of our educational institutions, it seems imperative that The Recording Academy continues to lend its resources and reputation to underscore the fundamental necessity of these in all of our lives.”